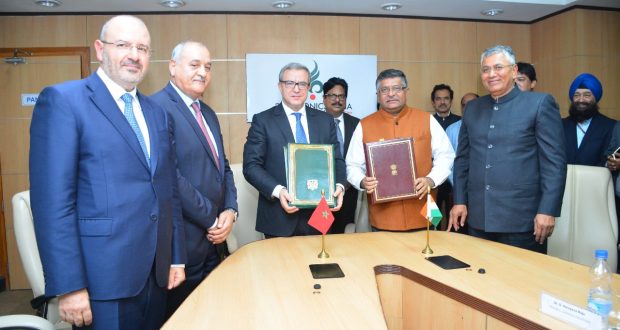 in International November 13, 2018 Comments Off on Morocco & India agree to assist in Legal & Commercial Matters 511 Views

Newdelhi:13/11/18 Morroco & India yesterday signed an agreement to further mutual legal assistance in Civil & Commercial Courts. Union Minister of Law & Justice and Electronics & IT, Sh. Ravi Shankar Prasad and his Moroccan Counterpart Mr Mohammed Auajjar, Minister of Justice were present on the occasion. The agreement will enhance co-operation in the service of summons, judicial documents, letters of request and the execution of judgments decrees and arbitral awards.

Speaking on the occasion Sh. Prasad said that India believes in the necessity of enhancing the domain of mutual co-operation with Morocco and realizing the importance of broadening the aspects of co-operation between both the countries in Civil and Commercial Matters.

Some of the salient features of the proposed agreement are:-

A joint declaration of Intent on cooperation in the field of modernization and use of information technology between National Informatics Center (NIC) of Government of India and Ministry of Justice of the Kingdom of Morocco was signed. The objective of this is to strengthen e-Governance including modernization of courts using IT as a tool to the mutual benefit of both sides by means of exchange of best practices, field visits of officials and experts and by such other means as may be jointly decided by the sides.

Center for Development of Advance Computing (CDAC), Govt. of India had set up a Center of Excellence in Information Technology in Casablanca in Morocco. This center was inaugurated on 7th May, 2018. It has 193 students and 10 students have already received placements in private as well as public sectors.

The said agreements will be beneficial for the citizens of both the countries. It will also fulfill the desire of both the countries to strengthen the bonds of friendship and fruitful cooperation in the Civil and Commercial matters, which is the spirit, essence and language of the agreement.

India and Morocco have interacted in historical terms going back to the 14th century when the famous traveler and writer from Tangier, Ibn Batuta travelled to India. His writings on medieval Indian society are as much an important source of historical information about India to the Indians as to the Moroccans. In modern history, India was active in the UN supporting the Moroccan freedom movement and recognized Morocco on 20 June 1956 when it became independent of the protectorate arrangements with France and diplomatic Missions were established in 1957.

Since the establishment of relations, India and Morocco have enjoyed cordial and friendly ties. From time to time dignitaries of one country visited other country. Indian dignitaries who visited Morocco includes Vice-President Dr. Zakir Hussain (1967) and Minister of Law & Justice (2016).