Top Headlines
Home » National » Reliance To Invest Rs 3,000 Cr in the State during the next three years 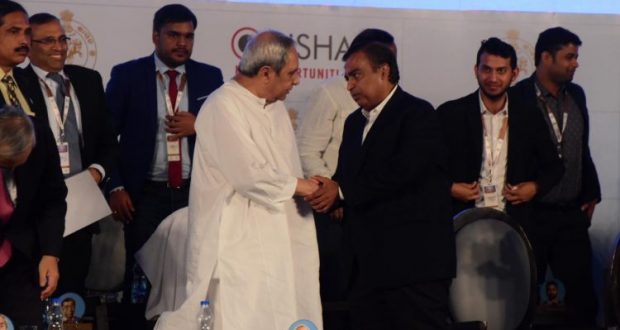 Reliance To Invest Rs 3,000 Cr in the State during the next three years

in National November 12, 2018 Comments Off on Reliance To Invest Rs 3,000 Cr in the State during the next three years 561 Views

Bhubaneswar:12/11/18: In the MIO 2018 Business Leadership Summit on Monday Reliance chairman Mukesh Ambani announced an additional investment of Rs 3,000 crore in the State during the next three years

His company had already invested over Rs 6,000 crore in Odisha,  Ambani said and added that an additional Rs 3,000 is in the pipeline for boosting the economy of the state. He said such an investment will set the motion of progress of Odisha on rapid strides.

The business tycoon described Reliance and Jio are the companies that are dependable and trustworthy for the state through ‘Make in Odisha Mission’. His company has developed employment avenues for more than 30,000 people in Odisha.

Ambani said, “ I am grateful to Odisha government for inviting me to the Conclave. My father Shri Dhirubhai Ambani & Shri Biju Patnaik, former Odisha CM shared a deep friendship and inspired millions of Indians. Reliance has already invested Rs 6000 crore in Odisha an additional Rs 3000 crore will be invested in next 3 yrs.”

Appreciating the growth of the state, Ambani said Odisha has been growing at 8% per annum, higher than the national average. Under the dynamic leadership of Chief Minister Naveen Patnaik, it is fast becoming a place for investment.

Ambani said his company’s aim is to digitize to every part of Odisha, particularly the rural areas and improve quality of education and healthcare.

Jio has connected all cities and towns, and 43 thousand villages in Odisha. In the past eight months, several million villagers in Odisha have got affordable smartphones. Their lives are being digitally transformed and empowered, Ambani further said.

2018-11-12
Editor in chief
Previous: Singapore’s ITEES signed an MoU with the Odisha government at the MIO conclave to set up a World Skill Centre in Bhubaneswar.
Next: Odisha in furtherance of strengthening its sporting prowess and capability across the country