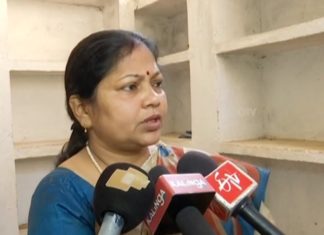 in State News November 11, 2018 Comments Off on Minati Behera was appointed as the president of Biju Mahila Janata Dal 886 Views

Bhubaneswar:11/11/18: Soon after stepping down from the post of Odisha State Commissioner for Persons with Disabilities, Minati Behera was appointed as the president of Biju Mahila Janata Dal (BMJD) today.

Meanwhile, Pramila Mallik has been appointed as the vice-president and advisor of the party’s women wing. Besides, Jyoti Panigrahi and Kasturi Mohapatra were appointed as the co-advisors of BMJD.

According to reports, Shreemayee Sweta Snigdha Mishra, Gitarani Bastia, Sulochana Das, and Lopamudra Baxipatra have been appointed as Working Presidents of Biju Mahila Janata Dal, while Sulata Deo and Elina Dash were appointed as General Secretary and Secretary of the party’s women wing respectively.

2018-11-11
Editor in chief
Previous: Odisha Chief Minister dedicated Make in Odisha Conclave to the sons of the soil
Next: World Congress of Poets in Bhubaneswar would be held on October 2019