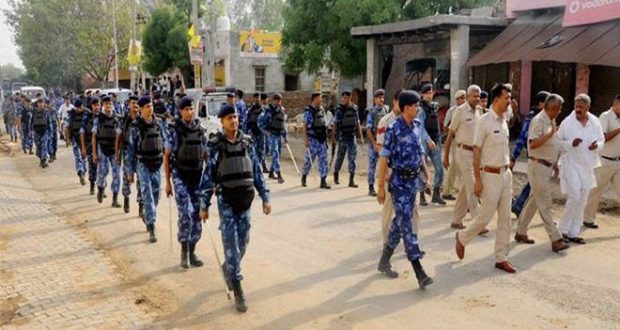 in National November 11, 2018 Comments Off on Eighteen assembly seats in eight districts of Chhattisgarh’s security-sensitive zone will go to polls on Monday 558 Views

Jagdalpur :11/11/18: As many as 18 assembly seats in eight districts of Chhattisgarh’s security-sensitive zone will go to polls on Monday. Chief Minister Raman Singh is hoping to continue his victory spree from Rajnandgaon seat for the third consecutive term.

This time he is seeking re-election against Karuna Shukla of the Congress. Shukla is the niece of former Prime Minister and prominent BJP leader late Atal Bihari Vajpayee. Shukla was a BJP Member of Parliament from Janjjir Lok Sabha constituency but she left the party in 2013 and joined the Congress in 2014. The same year during the General Elections while contesting on the Congress ticket from Bilaspur, she lost to the BJP candidate Lakhanlal Sahu. Since then, she has been actively engaged in the state politics, particularly in Rajnandgaon.

In the previous assembly elections held in 2013, the BJP, although retained power in the state, lost its mark in Bastar division and the Congress had an upper hand in the region. Out of a total of 12 seats, the Congress grabbed eight seats while the BJP managed to win only four seats.

In the past five years, the Raman Singh-led government has stated to have undertaken plenty of development works in Bastar. There are many assembly constituencies in Bastar division, where the BJP has given tickets to the old faces. In Rajnandgaon district, the party has fielded new faces in the region, which has six constituencies at stake.

The BJP government has claimed to have taken strict steps in tackling Naxalism. However, local residents of Bastar are still struggling with the decade-long problem. This factor could damage the BJP’s prospects this time round.

The BJP and the Congress leaders have left nothing unturned to turn the table on each other during their campaign. Speaking at a rally in the state where the first phase voting will take place on November 12 and second phase on 20, the Prime Minister Narendra Modi accused the Congress of supporting ‘Urban Naxals.’

He said: “Children who should hold pens in their hands, they are now holding guns in a monstrous manner. Urban Maoists live a luxurious lifestyle while they ruin the lives of children belonging to the tribal community, and Congress supports these people (urban Maoists).”

Similarly, the Congress has tried to woo the voters promising immediate loan waivers to poor farmers within 10 days of forming the government in the state. The party has also promised better healthcare facilities and a safer society for women in Chhattisgarh. Congress president Rahul Gandhi has repeatedly asserted his resolve to ensure all round development of the state if his party is voted to power.

2018-11-11
Editor in chief
Previous: Amitabh Bachchan inaugurates Kolkata film festival
Next: More than 100 students and their teachers and 15 regular walkers at the Heritage Walks