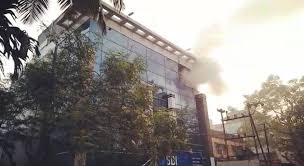 in Smartcity Bhubaneswar November 10, 2018 Comments Off on Massive fire broke out on the second floor of State Bank of India Bapuji Nagar branch 589 Views

Bhubaneswar10/11/18:: A massive fire broke out on the second floor of State Bank of India (SBI) branch in Bapuji Nagar branch in Bhubaneswar in the early morning on Saturday.

According to available sources, locals of the area noticed thick smoke emerging out of the SBI office building early in the morning and alerted the fire service personnel.

On being informed, two fire brigade units rushed to the spot and managed to douse the flames after an hour-long ordeal.

While no casualty or injury has been reported, records of the bank customers were reportedly burnt to ashes as the fire gutted at least 90 per cent of the record room.

The exact amount of property damaged will be established after a detailed assessment.

Though the actual reason behind the mishap is yet to be ascertained, it is suspected that the fire was caused due to an electrical short circuit.

2018-11-10
Editor in chief
Previous: BJP will attain power in Madhya Pradesh for the fourth time:Dharmendra Pradhan
Next: India is a voice for peace and non-violence: Vice President