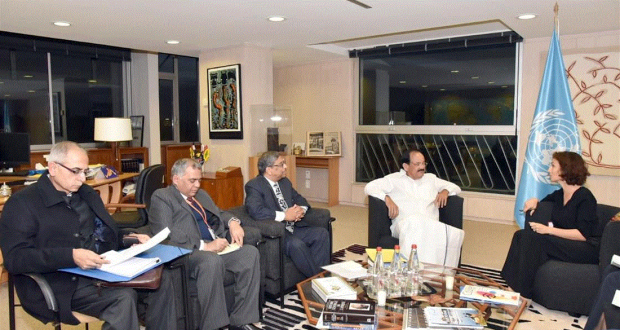 India is a voice for peace and non-violence: Vice President

in International November 10, 2018 Comments Off on India is a voice for peace and non-violence: Vice President 601 Views

Paris:10/11/18:The Vice President of India, Shri M. Venkaiah Naidu has said that India has always been a voice for peace and non violence from time immemorial. He was addressing the Indian Diaspora at UNSECO in Paris, France, yesterday. The Ambassador of India, Shri Veniay Mohan Kwatra and other dignitaries were present on the occasion.

Saying that peace is the only pre-requisite for progress, the Vice President said that in an inter-dependent world, progress can be achieved only through dialogue and understanding.

Saying that India is proud of the achievements of Indian Diaspora, the Vice President said that interacting with Indian Diaspora was like conversing within a growing but close-knit family. Persons of Indian origin and Indians abroad have excelled in many areas of French public life, with many as members in the French Parliament as well as in the European Parliament, he added.

Reminding the gathering about long and mutually enriching association with the French, the Vice President said that Rabindranath Tagore’s intellectual influence was known to have touched several French thinkers. Indian luminaries like Madame Bhikaji Cama and JRD Tata, who were significant figures in India’s pre-independence history, too had strong links with France, he added.

The Vice President also talked about the joint efforts of India and France to promote the use of clean energy by way of International Solar Alliance. He further said that India-France development partnership brought mutual rewards to both of our economies, especially in the field of smart urbanization and transportation.

The Vice President is in Paris, France to attend the centenary year of end of First World War.  He will also be participating at a global event at Arc d’ Trionphe in which he will pay homage to the martyrs of World War I.

He will also inaugurate the Indian Armed Forces Memorial at Villers Guislain as a tribute to several thousands of Indian soldiers whose gallantry and dedication have earned worldwide recognition.