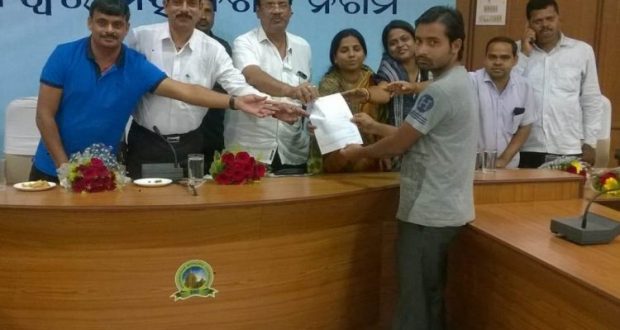 Bhubaneswar:10/11/18: In the fourth phase of its house allotment at Mahisakhala the Bhubaneswar Municipal Corporation (BMC) on Friday distributed provisional allotment letters to 68 beneficiaries.

As part of the in-situ development houses for economic weaker sections are developed in the area.

In the past the residents of Mahishakhala Slum were allotted 88, 98 and 75 houses and this time they received 68, making the total 329 houses distributed among the residents.

Both the Minister and Mayor appreciated the attitude of the residents of Mahisakhala Slum for cooperating with the civic administration for the allotment of the affordable housing scheme.

“BMC has facilitated the bank linkage for the beneficiaries. In fact, under the Rajeev Awas Yojana guidelines each beneficiary would take up Rs 1.2 lakh to get a house. However, by BMC for individual beneficiaries’ bank linkage up to Rs 1 lakh was done by BMC,” said Deputy Commissioner Srimanta Mishra.

Beneficiaries first deposited Rs 19,500 each and after that they will repay the RS 1 lakh loan linked through BMC and the banks concerned.

2018-11-10
Editor in chief
Previous: Top industrialists Mukesh Ambani, N Chandrasekaran, Kumar Mangalam Birla along with 800 other industry leaders are expected to attend ‘Make In Odisha’
Next: Popular documentary ‘Kotpad Weaving” will have be screened in Sydney, Australia, on November 16