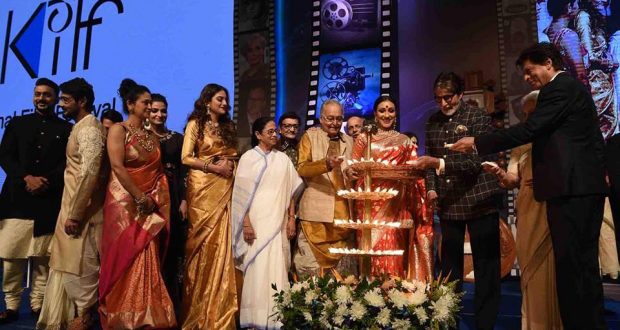 Kolkata:10/11/18:The Kolkata International Festival was inaugurated on Saturday evening by Amitabh Bachchan as he was flanked by who’s who of Hindi and Bengali cinema. In the presence of West Bengal chief minister Mamta Banerjee, Bachchan lit the ceremonial lamp to open the 24th edition of the festival. In his speech, the actor spoke about the glorious 100 years of the Bengali cinema.

The trailer of Shah Rukh Khan’s Zero was also screened at the event. SRK, in his speech said that he regrets not getting a National Award and he adds none of his films has ever been screened at any film festival of this stature. However, he added that Zero was a special film.

Other actors who were present at the event include Jaya Bachchan, Waheeda Rehman, Soumitra Chatterjee, Majid Majidi and Mahesh Bhatt, among others.

An array of diverse Australian films, cinema by Majidi and a centenary tribute to legendary Swedish director-producer Ingmar Bergman through the screening of eight of his outstanding movies are the highlights of the film festival.

The eight day long movie extravaganza, considered to be the country’s second oldest film fest, also has a plethora of award winning international cinema from countries like the US, Spain, France and Russia on offer for the city film buffs. The festival features 171 feature films, 150 shorts and documentaries from 70 countries.

With Australia being the focus country for this edition of the KIFF, screening of twenty six old and new films will take place across the venues. Australian director Philip Noyce, the maker of Angelina Jolie starrer “Salt”, is being honoured with a retrospective.

2018-11-10
Editor in chief
Previous: India is a voice for peace and non-violence: Vice President
Next: Eighteen assembly seats in eight districts of Chhattisgarh’s security-sensitive zone will go to polls on Monday