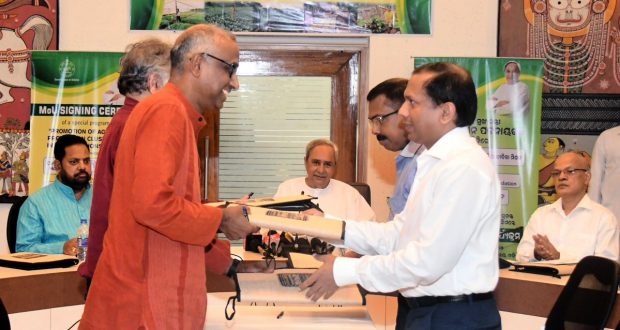 in State News November 6, 2018 Comments Off on MoU being signed among the Director of Horticulture on promotion of Agriculture Production Clusters 742 Views

This project will trigger growth in farm sector with an objective of sustainably doubling the income of one lakh small and marginal farmers by establishing Agriculture Production Clusters (APCs) in 40 blocks of 12 tribal dominated districts in the state over a period of 4 years, stated a press note.

Around 150 farmers will be organized into one Producer Group (PG) who would be facilitated to practise synchronized market linked production of identified crops, especially horticultural crops covering around 40 acres in a contiguous manner. Similar such 20-25 PGs having 3000 to 5000 farmers will be aggregated to form the Agriculture Production Cluster/Producers Company (PC) at appropriate level, the press note added. 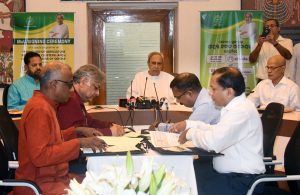 It further stated that total 30 such Producers Companies (PCs) will be promoted in 40 Blocks Involving around 650 Producer Groups covering 1,00,000 farmers. Around 750 market-linked Agri-Entrepreneurs will be groomed and nested as value chain enablers in these regions.

As a sustainable measure, non-pesticidal management (NPM) practices will be introduced in 40% of the areas. To augment the livelihoods of the farmers, livestock (Goat, Sheep and SW) rearing is also planned with around 40,000 families in these clusters. In these regions market routes and actors around identified commodities will be developed.

Livelihood assets like irrigation in 16,000 acres, orchard development in 8,000 acres, farm mechanization access to 70,000 farmers and shed for Goat and Backyard poultry with 30,000 farmers will be converged from existing schemes in this project to intensify the interventions, also mentioned the press note.

The available schemes with Directorate of Horticulture, OLM, OAIC, APICOL, OLIC and other relevant Departments will be converged for creation of livelihood infrastructures required for farmers in the regions.

2018-11-06
Editor in chief
Previous: World’s largest open air theatre, Dhanu Jatra will begin on January 11,2019
Next: Royal Bengal tigress Sundari was tranquilised by a team of expert near Majhipada forest