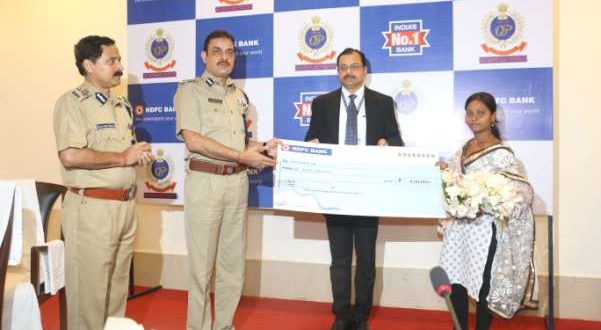 DGP Sharma handed over the cheque to the martyred sepoy’s next of kin in a simple function at RK Padhi Memorial Hall (IPS Mess) Cuttack. The claim was settled by HDFC bank.

Sharma appreciated the effort of HDFC Bank for an early settlement of insurance claim. He also called upon the bank officials to continue such kind of promptness in future days also.

Notably, Sepoy Sanjaya Majhi of District Voluntary Force achieved martyrdom while fighting in the line of duty on April 10, 2018. He sacrificed his life in a landmine explosion during a combing operation near Sakata village under Muniguda PS in Rayagada district.

Regional Head HDFC Debashis Senapati along with other Senior Officers of HDFC Bank and Odisha Police were present in the programme.

Speaking in on the occasion, Senapati said, “We feel privileged to be associated with Odisha Police. We are committed to serve Odisha Police in the best possible way. We have made provision for personal Accident Death Coverage of Rs 30 lakhs on the salary account to all Police officials in Odisha irrespective of ranks and cadres.”