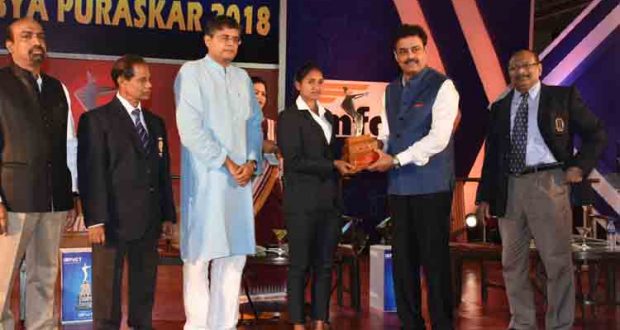 Minz received the award along with a cash prize of Rs 5 lakh from Indian cricketer Dilip Vengsarkar at a special function held at Bhubaneswar on Sunday.

Lilima Minz represented the Indian senior team for the first time in 2011 during a four-nation tournament in Argentina. She was also part of the squad that represented the country in the 2016 summer Olympics.

Minz was also part of the Indian team that won the gold medal in Women’s Hockey Asia Cup after a gap of 13 years in Japan on November 5, 2017.

After receiving the award, Minz stated, “I am extremely happy and was hopeful to receive the Ekalabya award. My target is to qualify for the 2020 Olympics.”

Apart from Lilima Minz, two other sportspersons including badminton player Rutuparna Panda were felicitated for their outstanding achievements in their field.

Coach P Dharma Rao received the citation on behalf of weightlifter Jhili Dalabehera as she could not attend the award function today.

Both Rutuparna and Jhili Dalabehera received a cash award of Rs 50,000 each along with citations.

Vengsarkar said, “The young players should focus on the game all the time. They must try to improve. Think of what you have done today and improve tomorrow They should not go for temptation and be disciplined and have proper education. I hope the award goes for many years to come for the sake of Odisha sportspersons and Odisha sports.”

Arjuna awardee Sunil Kumar Patra, who was the Guest of Honour at the function, said, “This type of award is very special and I congratulate the winners.”

IMPaCT has been promoting literature, sports, arts, culture and other socially meaningful activities in the state for decades.