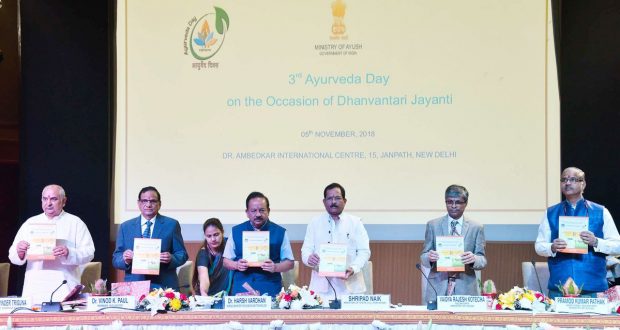 Ayurveda Departments will be opened in the new 19 AIIMS: Shripad Naik

Newdelhi:5/11/18:Minister of State for AYUSH Shri Shripad Yesso Naik has announced that Ayurveda Departments will be opened in the new 19 AIIMS. He said, work is already on to start  Ayurveda Departments in hundred  ESIC hospitals under Ministry of Labour.  Further, approval has been received from Home Ministry to open Ayurveda Deparments in seven hospitals of BSF and other Para military forces.

Inaugurating the 3rd Ayurveda Day in New Delhi today along with Union Minister for Science & Technology, Earth Sciences and Environment, Forest and Climate Change Dr. Harshvardhan, Shri Naik said, this year Ministry has taken many steps to fulfil the theme ‘Ayurveda for public health’ and decided for further expand the coverage of the National Programme of ‘Prevention of Non Communicable Disease’ from exiting six states. The Minister further said, the Ministry will organise 50 workshops in collaboration with MSME to enhance entrepreneurship in Ayurveda and AYUSH sector.

While addressing the gathering Dr. Harshvardhan shared his experiences about Ayurveda and other systems of Indian medicine. He emphasised upon the scientific integration of AYUSH system of medicines. He has also appreciated yesterday’s seminar for sensitizing young entrepreneurs and exploring business opportunities in Ayurveda.

The third Ayurveda Day is being celebrated throughout the country on the occasion of Dhanwantari Jayanti today. As a part of Ayurveda Day celebration, Ministry had organised a “National Seminar on Entrepreneurship and Business Development in Ayurveda” in association with NITI Aayog on 4th & 5th November 2018 at New Delhi, with the intention to encourage entrepreneurs and Ayurveda stakeholders towards businesses opportunities in the sector. The National Dhanwantary Ayurveda Awards were also given away today.

Nearly 800 participants from across the country were participated in the main function of 3rd Ayurveda day.  On this occasion “National Dhanwantari Ayurveda Award” were also conferred to eminent Vaidyas. This year, this prestigious awards are given to Vd. S.K. Mishra,   Prof. M. S. Baghel  and  Dr.Itoozhi Bhavadasan for their significant contribution for the promotion of Ayurveda. A cash prize of Rs. 5 lacs along with citation are given to the awardees. The winners of the National level Ayurveda quiz conducted by All India Institute of Ayurveda (AIIA), New Delhi, were also felicitated during function.

Another highlight observation of the 3rd Ayurveda Day was launch of the AYUSH-Health Management Information System (A-HMIS), a dedicated software application for Electronic Health Record (EHR) for the AYUSH systems of Healthcare which is expected to revolutionise the way Ayurveda, Yoga, Unani, Siddha and Homoeopathy are practised in the country, by inducting modern IT-solutions into these systems.

2018-11-05
Editor in chief
Previous: 5 Reasons why you should not miss IFFI 2018
Next: Mou Signed Between WAPCOS and Doppelmayr for End-To-End Solutions for Passenger Ropeway Projects