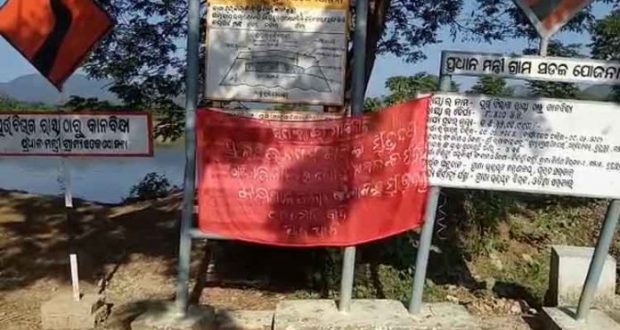 The handwritten banner did not mention names of the two MLAs but said they are from Ganjam and Kandhamal districts, police said.

The unnamed police informers on the hit list also belong to these two districts.

“The Maoist banner was found in Darpanga area (in Ganjam district). We are verifying its genuineness,” Ganjam Superintendent of Police Brijesh Kumar Rai said.

The banner written in white paint on a red cloth in Odia was found near Darpanga on Bhanjanagara-Phulbani road in Ganjam district. Local people found the banner in the morning and informed the police.

The SP said security personnel have been rushed to the place from where the hand written banner was recovered.

Since the banner did not mention any specific Maoist unit or division, the police suspected it could be fake.

“It might be the handiwork of some anti-social elements who have taken in the name of the Maoists,” said a senior police officer requesting anonymity.

The recovery of the “Maoist” banner followed the killing of two political leaders – a sitting and a former MLA of the Telugu Desam Party (TDP) – near Araku in neighbouring Andhra Pradesh by the red rebels on September 23.

“We have already provided security to some of the MLAs in the district after the incident in Andhra Pradesh,” police said.