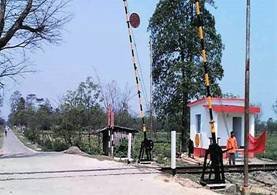 Newdelhi:2/11/18:Indian Railway has taken a mission area to eliminate all Unmanned Level Crossings (UMLCs) on Broad Gauge and accordingly special efforts have been made so that elimination can be completed at the earliest.

As on 01.04.2018, there were 3479 Unmanned Level Crossings on Broad Gauge routes. Total 3402 UMLCs have been eliminated in last seven months. Balance 77 UMLCs have also been planned to be eliminated by December 2018.

Most of the UMLCs have been eliminated either by provision of Subway/RUBs or by manning.

Progress of elimination in last 10 years is as under:

From the above, it is clear that in last 7 months progress improved more than 5 times as compared to last years.

All Unmanned level crossings on routes having speed more than 130KMPH and on Sub-urban routes have been eliminated.