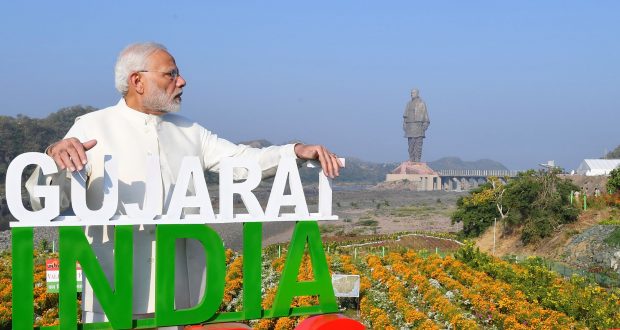 The Prime Minister, Shri Narendra Modi at the inauguration of the Valley of Flowers, during the dedication ceremony of the Statue of Unity to the Nation, on the occasion of the Rashtriya Ekta Diwas, at Kevadiya, in Narmada District of Gujarat on October 31, 2018.

in National October 31, 2018 Comments Off on Prime Minister Narendra Modi unveiled the ‘Statue of Unity’ in Gujarat 2,375 Views

Air Force planes showered flowers on the statue in a grand inaugural event on the banks of the Narmada river in Gujarat as PM Modi dedicated it to the nation.

The 182-metre structure of Sardar Vallabhbhai Patel is the world’s tallest and twice the height of the Statue of Liberty in the US. It is built on Sadhu Bet, an islet near the Sardar Sarovar Dam, at a cost of Rs. 2,989 crore. 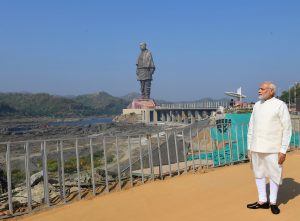 The Prime Minister, Shri Narendra Modi dedicates the Statue of Unity to the Nation,

This is a project that we had thought about during the time when I was the Chief Minister of Gujarat. To build the Statue of Unity, lakhs of farmers from all over India came together, gave their tools, portions of soil and thus, a mass movement started,” Modi said during his address after unveiling the statue.

The statue has been designed by Padma Bhushan-winning sculptor Ram V Sutar and has been built by Larsen and Toubro and the state-run Sardar Sarovar Narmada Nigam Ltd. It took about 250 engineers and 3,400 labourers to construct the statue in 33 months.

2018-10-31
Editor in chief
Previous: BJD government is the symbol of faith of 4.5 crore people of Odisha:Naveen Patnaik
Next: Anupam Kher has resigned from the post of Chairman of Film and Television Institute of India