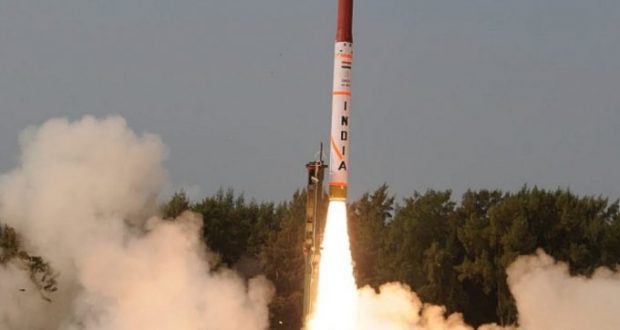 in National October 30, 2018 Comments Off on Agni-I ballistic missile was successfully conducted from a defence base in Odisha 1,147 Views

Bhadrak:30/10/18: Night trial of Agni-I ballistic missile was successfully conducted from a defence base in Odisha on Tuesday.

The indigenously developed surface-to-surface missile, which can strike a target over 700 km away, was launched by the Strategic Forces Command of Indian Army from Dr Abdul Kalam Island off the coast near Dhamra in Bhadrak district.

The test was conducted with the help of the scientists of Defence Research and Development Organisation (DRDO) as part of user trial.

Although several trials of the missile had been conducted from the same base since January 25, 2002, the night trial was conducted only for the second time to reconfirm its technological parameters. This sophisticated missile was test-fired from a mobile launcher at 11.10 pm from launch pad-4 of the Integrated Test Range (ITR) at Wheeler Island on  April 12, 2014.

Weighing 12 tonnes, the 15-metre-long, Agni-I, which can carry payloads up to 1,000 kg, has already been inducted into the Indian Army. It uses solid propulsion booster and a liquid propulsion upper stage, derived from country’s first indigenously developed ballistic missile Prithvi.

2018-10-30
Editor in chief
Previous: Odisha government made an upward revision in the minimum daily wages
Next: National Green Tribunal slapped a penalty of Rs 1 crore on CESU in the wake of the electrocution of seven elephants