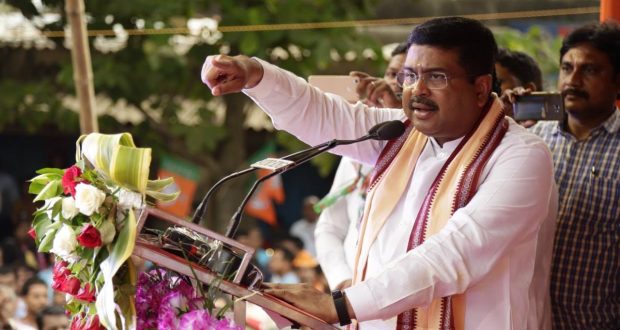 in District Diary October 28, 2018 Comments Off on Union Petroleum Minister said that farmers’ loans would be waived off once the BJP comes to power in Odisha 542 Views

Bhadrak:28/10/18: Union Petroleum Minister Dharmendra Pradhan on Sunday said that farmers’ loans would be waived off once the Bharatiya Janata Party (BJP) comes to power in Odisha.

“We will waive off farmers’ loans when we come to power in Odisha,” Pradhan said while addressing a public meeting of the party in Bhadrak on Sunday.

The statement of Pradhan came after several cases of farmer suicides were reported due to crop loss in the state.

He also attacked the BJD government saying that chit-fund heroes were running the government in Odisha.

The Minister said about Rs 1 lakh crore loan is on the people of the state due to financial mismanagement by the state government in the last 18 years.

2018-10-28
Editor in chief
Previous: Prime Minister Narendra Modi advised sport lovers to attend the Odisha Hockey Men’s World Cup-2018
Next: Farmers in the coastal districts of Odisha are now a worried for heavy rain over influence of a cyclonic circulation