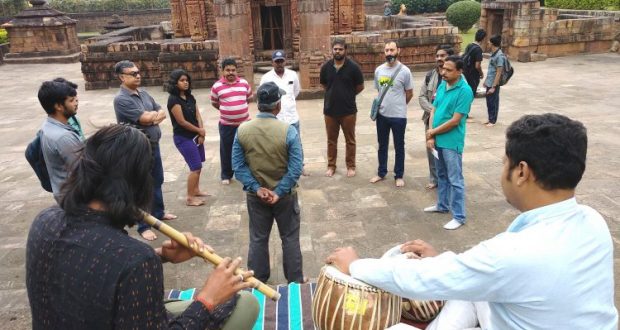 in Smartcity Bhubaneswar October 28, 2018 Comments Off on Senior fellows and researchers at Centre for Policy Research were part of the 97th Ekamra Walks 627 Views

Bhubaneswar:28/10/18: Senior fellows and researchers at Centre for Policy Research (CPR), a Central think tank based in New Delhi, Water, Sanitation and Hygiene (WASH) Institute, and Urban Management Centre Ahmedabad were part of the 97th Ekamra Walks Old Town Circuit, among other visitors from in and around the city.

While visiting the Dudhwala Dharamsala the visitors also got an idea of the traditional “Habish” by widows at the heritage inn for budget pilgrims.

“Habish” is a traditional observation of religious practice during the month of Kartik, which is supposed to be an auspicious month in the Hindu calendar. The widows not only worship different Gods and Goddesses and take simple food, they also practice the “puja” collectively at the Dharamsala, organised by the Tourism Department.

The visitors from New Delhi were here in the city and later on a visit to places of tourism interests in the Golden Triangle i.e. Bhubaneswar, Puri and Konark following a national workshop on fecal sludge and sewage management in the city. However, they found Ekamra Walks as an interesting and engaging alternative in the City of Temples.

2018-10-28
Editor in chief
Previous: Odisha Chief Minister ordered an inquiry by the crime branch into the electrocution of seven elephants
Next: Over 3,345 protesters who prevented women from entering the Sabarimala temple have been arrested