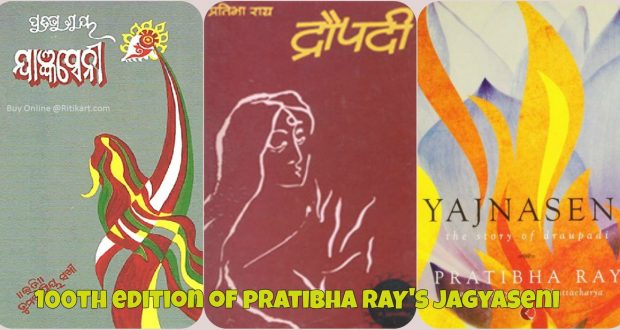 in Literature, National October 27, 2018 Comments Off on The 100th EDITION OF Pratibha Ray’S JAGYASENI (ODIA) goes to press 1,139 Views

The book has been translated into various languages, including English, Hindi, Malayalam, Marathi, Assamese,Gujarati,Sanskrit, Bengali, Nepali and Hungarian.

“Pratibha Ray’s meteoric rise to national fame flows mostly from her Yagnaseni (Daughter of Yagnasena in the Mahabharat) which epitomizes the famed Mahabharat heroine
Draupadi as a modern woman with an identity of her own. Pratibha’s Draupadi is illustrative of what she herself has said in several interviews, a sort of “humanist feminism” without the rigour or rancour of a Julia Kristeva or Luce Irrigaray. This’
Draupadi is in the tradition of the classical feminine as envisaged by Vyasa and other Vedic philosophers: yet she is sophisticated, knowledgeable, well-versed in fine arts, warfare
and even the dice game. She is magnanimous and self-eschewing almost transcending the milieu which she inherits.
Pratibha uses the epic facts and modulates them with modern
feminine outlook to make her our contemporary.”