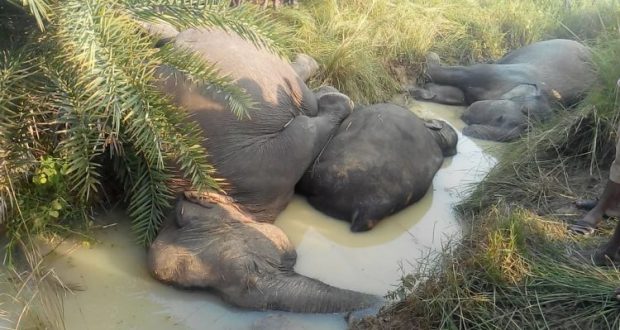 Dhenkanal:27/10/18: Six officials were placed under suspension while one was dismissed from service in connection with the death of seven elephants in electrocution at Kamalanga village under Sadar Forest Range in Dhenkanal district last night.

Three officials each from the forest department and the Central Electricity Supply Utility of Odisha (CESU) have been suspended for dereliction of duty.

Moreover, Sanjay Mohanty, a junior engineer of CESU, Meramundali has been dismissed from service for the deaths of the elephants.

According to sources, seven elephants were electrocuted to death after coming in contact with a live electric wire at Kamalanga village under Sadar Forest Range in Dhenkanal district last night. The carcasses of the pachyderms were found on Saturday morning.

A herd of around 13 wild tuskers ventured into the village proximity last night. Seven elephants of the herd died on the spot after coming in contact with the low-hanging live 11KV wire that was laid by the railway department for track construction work.

Bodies of the seven elephants were lying scattered near a nullah this morning.

2018-10-27
Editor in chief
Previous: Coal-Powered thermal power plants and industries is poised Mahanadi Water
Next: “Eradicate Corruption-Build A New India” at the inaugural ceremony of Vigilance Awareness Week at MCL