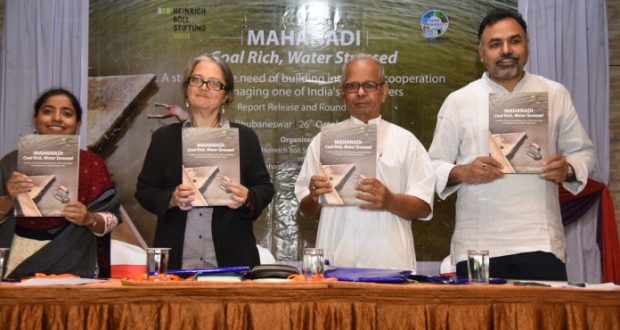 Bhubaneswar:27/10/18:Even as both Odisha and Chhattisgarh are at loggers head over distribution of Mahanadi river, the establishment of thermal power plants and industries is poised to further thin down the water sources of the major river, according to a latest study.

Addressing media persons, Ranjan Panda, an expert on water issues said “both the states have committed themselves to mining and industrialisation in the name of ‘development’ and have been promoting the Mahanadi as a ‘water surplus’ river for inviting more investment into mining and industrial sector. Being the youngest inter-state river water dispute of India, this case offers a lot of opportunities to understand the new dimensions of conflict that the earlier conflicts had not dealt with at least while being fought in the tribunals or courts. Impacts of coal fired power plants and climate change are such new dimension”.

The research suggests the governments should forge a cooperation among each other to manage Mahanadi in a holistic approach. It puts forth a two-pronged approach to deal the Mahanadi crisis – the legal recourse and the peace and cooperation building.

While the legal recourse has been approached under ISRWDA and a tribunal has already been formed, the problem with the tribunals is that they have accepted the term ‘river development’ in a way that means building more dams and projects that alter the flow and impact the ecology of rivers.

The second approach – peace and cooperation building –suggests the need of the hour for Mahanadi is a joint strategic action between the two major riparian states to help the river survive the stress and get rejuvenated, pointed out Panda.

As large dams and interlinking of rivers (ILR) project will further aggravate the conflict and marginalise the local communities as has been the case almost everywhere, both the governments should say no to this, he added.

The report also highlighted that without having a comprehensive assessment of the basin’s water holding scenario and the rights of people over these, any strong monitoring on the share of water of both the warring sates can hardly be guaranteed.

“It is time to recognise the ‘rivers’ right to life’ in line with the right enjoyed by Indian citizens, and help them flow freely in healthy conditions. The governments should help cater to the needs of riparian communities maintain biodiversity and other priorities in a sustainable manner,” said Panda.

Marion Regina Mueller, country director, Heinrich Boell Stiftung, the foundation that supported the study, said, “To ensure sustainable water governance, all policy frameworks and related strategies should focus on the diverse eco-system of rivers rather than their commodification for development and industrial usage. Community rights and interests should be respected and ascertained on all levels of decision making.

Sadia Sohail, programme coordinator, Heinrich Boell Stiftung, highlighted on the need to look at the interlink between rivers, forests and communities and develop a holistic approach to address river management and natural resource management at large.

2018-10-27
Editor in chief
Previous: Anil Dhir has nominated as the Honorary Officer for Odisha Animal Welfare Board
Next: Six officials were placed under suspension in connection with the death of seven elephants in electrocution