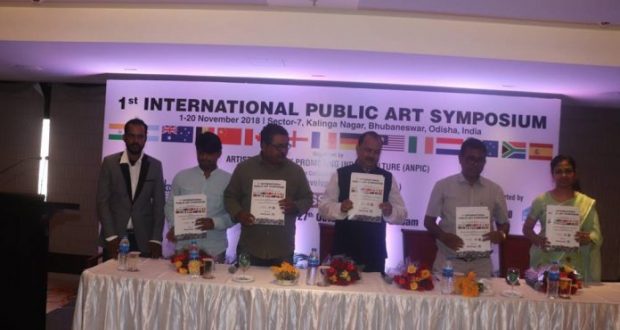 Noted artists from 14 countries will be attending and creating sculptures from Waste materials, which will be permanently displayed at a Sculpture Museum provided by BDA for the people of Odisha.

The live sculpturing will continue for 20 days and after that an open air sculpture museum will be inaugurated. Themed on ‘Reduce, Reuse, Recycle’, the museum would serve as the only open air Public Art Waste Material Sculpture Museum in the Smart city which would create awareness amongst people of Odisha on environment, Climate Change and Reuse of Waste Materials etc.

The event is envisioned as part of the state’s active involvement in issues of a secular theme and nature through socio-cultural arts. The artworks which are intended to be made mainly from waste material and scrap metal will propagate eco-friendly message. Focus to be made on alarming issues like global warming, deforestation, flood, and also protection of our wildlife species specially which are endangered from natural calamities, road kill, hunting, poaching etc. It will put a spotlight on species like the Odisha Olive Ridley Turtle, the Indian /Odisha Elephant, the Indian Rhino, the Nilgiri Tahr, the Bengal Tiger, the Blackbuck, Snow Leopard and the Lion-Tailed Macaque to name a few.

Speaking on the programme, Bhabani Sankar Chayani, Member Enforcement, BDA, said, “This is a great initiative by ANPIC where international artists would come and create sculptures from waste materials in the space provided by BDA near Kalinga Nagar.”

“This programme has two major objectives — one is to aware people about the waste materials with the campaign ‘Reduce, Reuse & Recycle’. And the other is one should think about the aesthetics of this initiative,“ he added.

The event will also play a role in the government promoting better environmental practices, like the complete banning of plastic bags, the reduction of large buildings with reflective surfaces, the reduction of green house gases and carbon footprint on the planet, better use of public transport reduction of pollutants that lead to the increase of global warming. The planting of new forests can help mitigate against climate change by removing the alarming and rising amounts of CO2 and other greenhouse gases from the atmosphere.

2018-10-27
Editor in chief
Previous: Odisha chief minister present at centenary programme of Maha Samadhi of Sri Siridi Sai
Next: Anil Dhir has nominated as the Honorary Officer for Odisha Animal Welfare Board