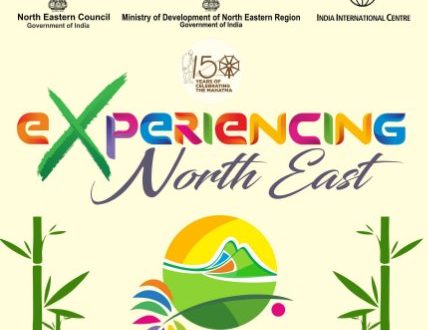 The festival will be inaugurated by Shri N.N. Vohra, Former Governor and President, IIC, at 6.30 PM on 27thOctober 2018, to be followed by the Shillong Chamber Choir Concert.

Addressing a press briefing , Joint Secretary, Ministry of DoNER, Shri S. N. Pradhan said that the event which is a part of ‘Destination North East’ series aims at showcasing the diverse culture and heritage of North East all under one roof. It will highlight the strengths of North East, he said.

Giving details about the workshops being held during the festival, Economic Advisor, M/O DoNER, Smt. Mamata Shankar said that there will be 5 workshops focusing on various themes like Adventure Tourism in NER, Science & Technology Interventions in North East Region (STINER), Act East & NER will provide opportunities for discussions and brainstorming sessions.

The event will have weavers from across the North East Region who will display their skill and wonderful creations. Handlooms of the region which has caught the attention of many will be displayed along with the exotic and organic local produce, processed food, multi-cultural and diverse cuisine of the region.

Apart from this, the rich heritage of North East will be showcased through its art and literature, films and the rich musical talent from the region. The internationally acclaimed The Shillong Chamber Choir, Vinyle Records, Mayukh Hazarika and many more talents will be keeping the spirits of Delhiites upbeat during the 5-day event.

Dr. Jitendra Singh, Minister of State (IC) for the Ministry of Development of North Eastern Region (MDoNER) will grace the closing ceremony on 31st October 2018, followed by performance of Ras Leela of Manipur by the Jawaharlal Nehru Manipur Dance Academy.

The entry to the festival is free.