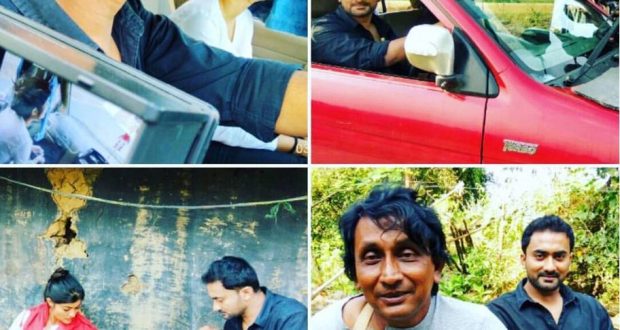 Bhubaneswar:26/10/18: Odia feature film ‘Hello Arsi’ has been selected as one of 12 entries for Tallinn Black Nights Film Festival to be held from November 16 to December 2 at the capital city of Estonia.

It will be screened in First Feature Competition category of this leading film festival in the Nordic countries and Eastern Europe.

Representing countries from five continents, the festival has added eleven competition films to the previously announced seven, with six of them originating from European countries, two from Asia, two from the Americas and one from Africa.

‘Hello Arsi’ had won three awards at the 65th National Film Awards announced in April this year. The film got the honours for Best Odia Film, Best Dialogue and also a Special Mention for actress Prakruti Mishra.

Partha Sarathi Ray and Prakruti have played the lead pair in the film jointly produced by Ajay Routray and Sambit Mohanty, who was also the director.

The film will celebrate its world premiere at the festival with Ajay Routray representing as the producer.

A man and a woman lay side by side in bed. Who are they and how do they know each other? There is no one clear answer and that’s what makes this story interesting.

“Hello Arsi” is a movie that shouldn’t work and yet it does. Most of the action takes place in a car, that same man and woman are driving and talking. Talking about everything and nothing. They tell each other stories about themselves and stories of a time when that road they are currently driving on didn’t even exist. All of us are a collection of untold stories. However it gets a lot more complicated when they start talking about their feelings. “Hello Arsi” is a fascinating and tender contemplation on what it means to be a woman, the nature of relationships, and life in general.

Filmed in Odia language, this is writer-director Sambit Mohanty’s first and unfortunately also last film (he died suddenly during post-production in 2017). You can sense a longing here for a simpler time and a yearning to find each other in a situation where advancements in technology have isolated us more and more. We often hear the sounds of nature throughout this movie, but we rarely see any nature. Where once was a forest, now stands a factory and rows upon rows of new roads.

(1962-2017) was a graduate from BJB College Bhubaneswar and FTII in Pune. Mohanty got involved in the film society movement and served as a visiting faculty at various institutions. Completing his first feature film ”Hello Arsi” Mohanty had a sudden demise in February 2017.

Started in 1997, the Tallinn Black Nights Film Festival has grown into one of the biggest film festivals in Northern Europe and busiest regional industry platforms, hosting more than 1000 guests and industry delegates and over 160 journalists. The festival screens around 250 features and more than 300 shorts and animations and sees an attendance of 80 000 people annually. In 2017 the festival was covered in 71 languages with a potential global media audience of over 1.1 billion people.

As of 2014 the festival holds the FIAPF accreditation for holding an international competition programme which puts the festival into the so- called A-category of film festivals, alongside other 14 festivals in the world (including Cannes, Berlinale, Venice, Karlovy Vary, San Sebastian, Shanghai, Tokyo etc).

2018-10-26
Editor in chief
Previous: EKAMRA SPORTS LITERARY FESTIVAL will be held on November 2nd & 3rd, 2018 as a precursor to the Hockey World Cup
Next: Odia film “Khyanikaa – The Lost Idea” is now travelling to Mexico