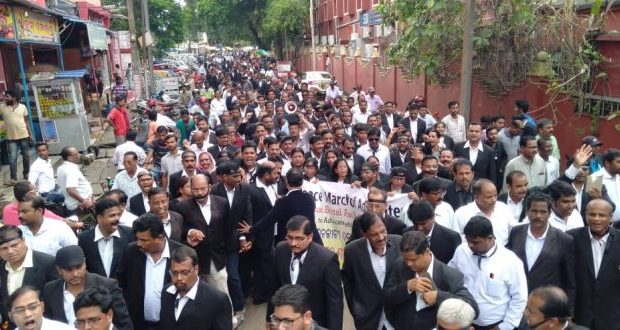 in State News October 26, 2018 Comments Off on Lawyers will burn the effigy of Chief Minister Naveen Patnaik at all Bars across the state on October 31 529 Views

Cuttack:26/10/18: Protesting against the Odisha government’s inaction to resolve the ongoing row over police excesses on a lawyer in Cuttack on August 28, the Orissa High Court Bar Association on Friday decided to continue its stir till October 30.

Lawyers will burn the effigy of Chief Minister Naveen Patnaik at all Bars across the state on October 31.

The Association took a decision to this effect at its general council meeting this afternoon.

Talking to mediapersons after the meeting, secretary of the High Court Bar Association, Satyabrata Mohanty, said though the incident occurred about two months ago, the state government has not taken any step to resolve the impasse. Though the government is aware that the people are deprived of judicial assistance as all court work has been stopped due to the strike, the Chief Minister has shown no concern over the issue.

“It was decided in the meeting that the Association will continue its agitation till October 30 and take its next course of action at a meeting on that day itself. Besides, it was decided that the lawyers will burn the effigy of the Chief Minister at all the Bars across the state on October 31,” Mohanty pointed out.

It may be mentioned here that the Supreme Court on September 27, had asked the agitating lawyers to withdraw their ongoing strike and join duty and directed the Orissa High Court Bar Association and other connected associations to resume court work.

Hearing a Public Interest Litigation (PIL) in this regard, the top court has ordered the Director General of Police (DGP) Rajendra Prasad Sharma to transfer the investigation pertaining to the case to the IG, Crime Branch.

Three days after the directive of the apex court, the Bar Council of India (BCI) on September 30, had sought the urgent intervention of the  apex court to resolve the impasse.

In a letter to the Chief Justice of Supreme Court, BCI chairman Manas Kumar Mishra, said that the lawyers of the Orissa High Court Bar Association have not worked out the order of the apex court that had asked them to call off their strike and to resume the court work.