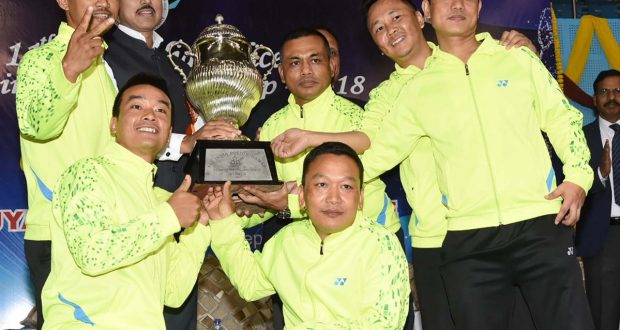 in Sports October 26, 2018 Comments Off on Col. Rajyavardhan Rathore distributes the prizes to the medal winners of 11th All India Police Badminton Championship 2018 621 Views

The 5-day event was conducted in the Indira Gandhi Indoor stadium in which 36 teams from State police and Central Armed Police Forces took part. Altogether 399 players, including 50 female players, participated in 16 categories. The unique aspect of these games was that for the first time in the history of All India police games, players other than officers also participated. Mizoram police team clinched overall championship while CRPF team won the Runner-up team championship.

Congratulating the winners in various categories, Col Rathore emphasised that Sports promote physical fitness and espirit de corps amongst the ranks and file, which is vital for the uniformed personnel. He said the perception about Games and sports is undergoing massive change, and it has been seen that those who play blossom in their lives and stay happy. He added that he feels a sense of belongingness with the uniformed personnel. The Minister asked those who could not win the model, to not feel disappointed, and work hard for victories in the future. He assured full support of the Sports Ministry in all activities relating to games.

2018-10-26
Editor in chief
Previous: Unique aspects of North Eastern culture to be showcased during the 5-day long event
Next: Prime Ministers of India & Italy will address the Tech Summit