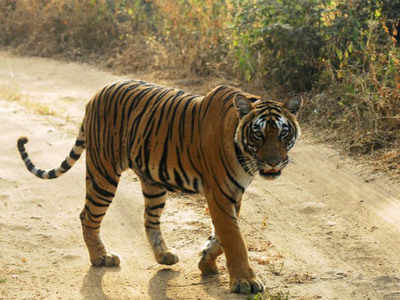 in District Diary October 25, 2018 Comments Off on Sundari’ Still Elusive, Odisha government has sought the assistance of experts from Madhya Pradesh 599 Views

Satkosia:25/10/18: The Odisha government has sought the assistance of experts from Madhya Pradesh to send expert to capture the Royal Bengal Tigress ‘Sundari’ in Satkosia Wildlife Sanctuary as the state forest department staff are unable to tranquilise the big cat in the wild, officials said Thursday.

The tigress which has claimed two human lives so far continues to play hide and seek despite frantic efforts on part of officials to cage it. For both the forest personnel and local residents, the elusive tigress has become a major cause of anxiety.

Additional Principal Chief Conservator of Forests (PCCF), Sudarshan Panda said the state government has already deployed three teams to tranquilise the tigress but no positive results have been made so far, so request sent to Madhya Pradesh government to capture ‘Sundari’.

“The Madhya Pradesh government has agreed to send two specialist teams from the Kanha National Park and Pench Tiger Reserve for the purpose. The two teams are expected to arrive at the Satkosia in 2-3 days and start their operation to capture Sundari,” Panda told reporters.

The forest department staff are unable to tranquilise ‘Sundari’ since two days in the Satkosia Wildlife Sanctuary in Angul district as the tigress slips from the target, officials said.

According to the latest reports, the tigress was located inside the hill forest at Baghamunda near Kumuri village, the APCCF said.

To attract the tigress, the teams on Wednesday night tied a goat near Kumari village and even sprayed the urine of a male tiger. Though the tigress came out, she later ran away to another place.

‘Sundari’ was relocated from Madhya Pradeshs Bandhavgarh Tiger Reserve to Odishas Satkosia on June 28, in a pilot inter-state transfer project for re-introduction of the big cats in the area

The Odisha government decided to capture the tigress after allegations were made that she killed at least two human beings within a span of 45 days.

2018-10-25
Editor in chief
Previous: Smart City walls are all set for a colorful look with mural paintings based on the World Cup Hockey
Next: Trinamool Congress mocked at “corrupt” BJP for trying to “rein in corruption” in the CBI