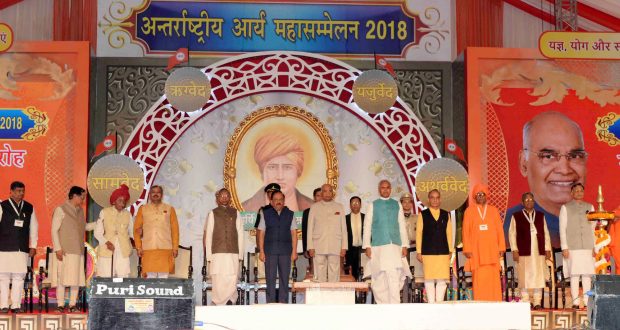 The President, Shri Ram Nath Kovind at the inauguration of the International Arya Mahasammelan  2018, in New Delhi on October 25, 2018.

Speaking on the occasion, the President said that in the 19th century when we were considering our culture and beliefs inferior than the western culture, Swami DayanandSaraswati showed us the path of renaissance and self-pride. He was an intrepid warrior of social and spiritual reform. He took effective measures for educational and social reform especially for women empowerment and eradication of untouchability. His work is relevant even in the present times both for Indian society and the entire world.

The President was happy to note that this Mahasammelan with discuss on the issues such as prevention of superstition, modernization, women empowerment, tribal welfare, and management of natural calamities. He expressed hope that the Arya Samaj will also work to promote the use of solar and other alternative sources of energy to contribute towards environmental protection.

The President noted that around 10,000 units of Arya Samaj are engaged in welfare activities across the world. He said that the Arya Samaj has made effective contributions to promote modern education based on ethics and worked for the upliftment of all sections of society, especially women and the deprived. It has established many schools and colleges in the country.

2018-10-25
Editor in chief
Previous: Union Ministry of Civil Aviation has issued show cause notice to AirOdisha
Next: Tagore Award for Cultural Harmony for 2014, 2015 & 2016 announced