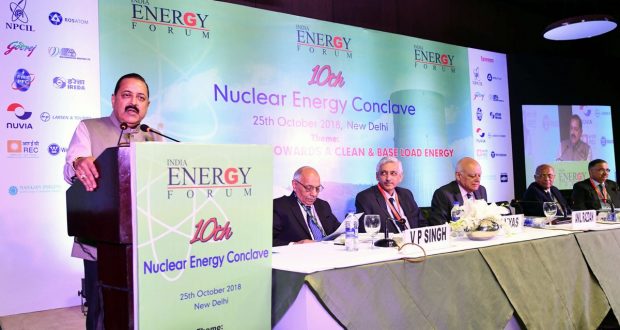 Newdelhi:25/10/18:The Union Minister of State (Independent Charge) for Development of North Eastern Region (DoNER), MoS PMO, Personnel, Public Grievances & Pensions, Atomic Energy and Space, Dr Jitendra Singh said that India has vindicated the vision of the founding father of country’s Nuclear Energy Programme, Dr Homi J. Bhabha, when he had said that India’s nuclear programme will be used for peaceful purposes. Delivering the inaugural address at the 10th Nuclear Energy Conclave here today, he said that the Government under the leadership of Prime Minister Shri Narendra Modi, the Government has focussed on non-power applications of nuclear energy. The same principle has been promoted in other departments also such as Department of Space where use of space technology is being encouraged for the benefit of common man.While delivering his keynote address, the Chairman AEC and Secretary, Department of Atomic Energy (DAE) Dr K N Vyas said that organising such conclaves has wide ranging benefits in understanding the benefits and allying any fears about nuclear energy. He spoke about the benefits of nuclear energy for power and non-power applications. Elaborating on non-power applications, he said that nuclear agriculture developed with the cooperation of agriculture universities and ICAR is one such example, others being nuclear medicine, low cost solution for water purification, urban waste management and food preservation programme, etc.

Speaking about the utility of nuclear energy, the President, Indian Energy Forum (IEF) and former Secretary, Ministry of Power, Shri Anil Razdan, said that earth temperature has to be brought down as per Intergovernmental Panel on Climate Change (IPCC), and this is possible essentially by de-carbonising the energy resources. He added that energy resources are very important as GDP is directly related to them. During his address, the Chairman, Nuclear Energy Group, India Energy Forum and Chancellor Homi Bhabha National Institute and former Chairman, Atomic Energy Commission (AEC) Dr. Srikumar Banerjee, compared the features of nuclear energy and other sources of renewable energy. Both are complementary to each other, he added. Dr Banerjee said that the real challenge is to bring down the cost of nuclear energy during the gestation period. He said presently the share of nuclear energy in India is just 3%, as compared to global average of about 10% and this needs to be improved.

Prof. Raman Srikant, Professor and Head, Energy and Environment Programme, National Institute of Advance Studies delivered special address on the topic ‘Primary Energy Sources: Nuclear and Solar’. He said although the share of renewable energy is growing, still about 75% of energy is coming from coal. Prof. Srikant said to ensure the integrity, security and reliability of the Grid as well as demand-supply match, a combination of Renewable energy and conventional sources of electricity are required.  The roundtable on “Growth of Nuclear Power: Fleet Mode Implementation” chaired by the Chairman and Managing Director (CMD), NPCIL, Shri S K Sharma, is another highlight of the conclave. During the conclave, two sessions titled ‘Nuclear Energy Applications in Medical and Agriculture’ and ‘Long term perspective of Nuclear Power’ were chaired by Shri S A Bhadwaj, Chairman, AERB and Dr S Banerjee, former Chairman, AEC respectively.The eminent scholars in the field of nuclear energy & medicine and foreign delegates also attended the conclave.