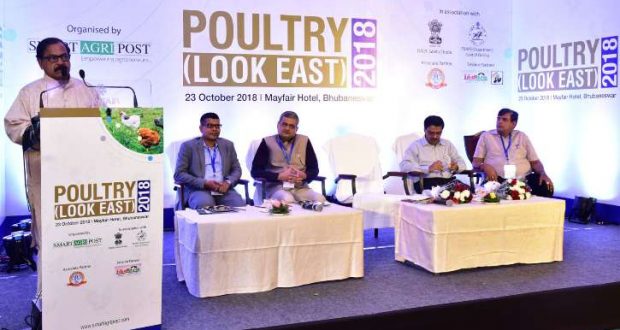 in State News October 23, 2018 Comments Off on Odisha has set its eyes on becoming self-sufficient in poultry and egg production 565 Views

Bhubaneswar:23/10/18:The state has set its eyes on becoming self-sufficient in poultry and egg production, said state Finance and Excise Minister Sashi Bhusan Behera while felicitating several entrepreneurs for their contribution towards the sector in an event organised by Smart Agri Post, here Tuesday.

The conference ‘Poultry (Look East) 2018’ was organised jointly by private stakeholders in association with Department of Animal Husbandry, Dairying & Fisheries (DADF) under Ministry of Agriculture & Farmers Welfare and Fisheries & Animal Resources Development Department of the state.

It may be noted here that, poultry is one of the fastest growing segments in the agricultural sector in India. The production of agricultural crops has seen a growth rate of 1.5 to 2 per cent per annum, while the production of eggs and broilers has been rising at a rate of 8 to 10 per cent per annum. As a result, India is now the world’s third largest egg producer and the fourth largest producer of broilers. India is one of the few countries in the world that has put into place a sustained specific pathogen free (SPF) egg production project. The egg production in the country has increased from around 83 billion in 2015-16 to around 88 billion in 2016-17 registering a growth of about six per cent. Though egg processing industry has increased exports from around Rs 250 crores to about Rs 500 crores in FY 2015-16, the export turnover has reduced to Rs 325 crores in FY 2017-18.

2018-10-23
Editor in chief
Previous: Odisha has emerged as steel hub of the country in the last 18 years:Naveen Patnaik
Next: Odisha government appointed eight fresh IAS officers