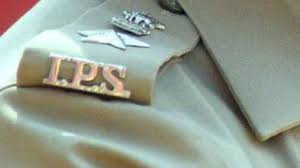 Thankappan is presently serving as registrar of Sambalpur University and has been elevated to the anti-corruption wing.

RP Singh, who is presently on repatriation from Central deputation, has been appointed as DG Prisons and Director Correctional Services.

Singh will replace BN Jha who has been attached to the Home Department.

Similarly, Vigilance IG Yatindra Koyal has been appointed STF IG while Pravakar Swain has been made SP in-charge of Police Training Institute.