Top Headlines
Home » State News » After being grilled for a couple of hour, journalist Abhijit Iyer Mitra was arrested 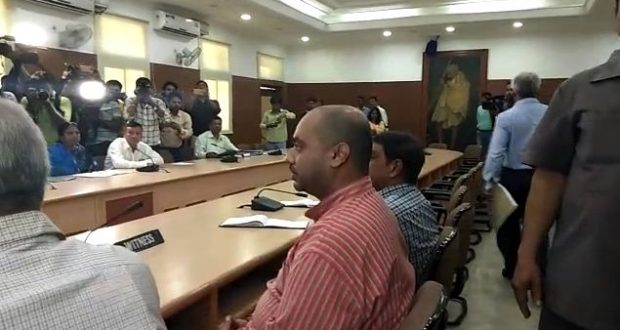 After being grilled for a couple of hour, journalist Abhijit Iyer Mitra was arrested

Bhubaneswar23/10/18:: After being grilled for a couple of hour, journalist Abhijit Iyer Mitra was arrested on the basis of a complaint filed against him at Sahid Nagar police station here, the Commissionerate Police said.

According to Zone 5 ACP Kishore Chandra Mund, Iyer was arrested after being charged with various sections of the IPC based on a complaint filed with Sahid Nagar police on September 20 by Manoranjan Swain.

On the basis of the complaint, police has registered a case (432/18) under Sections 294, 295 A, 153 A, 500 and 506 of IPC and Section 67 of IT Act against Iyer for allegedly hurling derogatory remarks on the world famous Konark Sun Temple, Odisha and its lawmakers.

Iyer was brought to Sahid Nagar police station amid tight security this evening after a medical check-up at Capital Hospital. He will be produced before the court of Judicial Magistrate First Class (JMFC) today as Sub-Divisional Judicial Magistrate in on leave, said a source.

Earlier this morning, Iyer appeared before the House panel of Odisha Assembly and tendered an apology for making derogatory remarks against Odisha, its culture and lawmakers. After that he was taken into custody by Sahid Nagar police and was grilled for hours in an anonymous location.

2018-10-23
Editor in chief
Previous: 38 Moussigned at Bhubaneswar Steel Conclave
Next: Odisha has emerged as steel hub of the country in the last 18 years:Naveen Patnaik