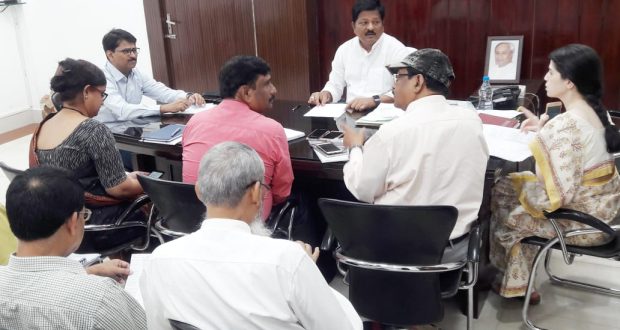 in State News October 22, 2018 Comments Off on Prevent possible epidemic outbreak in the flood-affected districts Health Department have stepped up preventive measures 500 Views

Bhubaneswar:22/10/18: In order to prevent possible epidemic outbreak in the flood-affected districts in the state post Cyclone Titli, the Odisha Government’s Health Department have stepped up preventive measures. The risk of epidemic outbreak post floods is considered higher.

Around 154 health care centers have suffered extensive damage and so far 29,015 persons have been provided medical facilities in the flood-affected districts of Odisha triggered by Cyclone Titli and resultant flood.

The figures were revealed during a high-level review meeting under the chairmanship of Health and Family Welfare Minister Pratap Jena held recently at the state secretariat.

According to the health department release, as many as 58 doctors from various districts have been deployed in the affected areas while 87 mobile teams deployed in 193 MRCs. Besides, 272 expectant women have been shifted to Maternity Homes and ‘Maa Gruhas’.

During the meeting, Health Minister Jena laid stress on ensuring that immediate health care service should be provided to the people in the flood affected areas.

It was learnt also that necessary medicine were stocked in the District Headquarters Hospitals (DHHs) before the very severe cyclonic storm struck the southern part of the state and resulted in flash floods. Many parts of the affected area are still inundated in the water.

In order to provide safe drinking water adequate number of Halogen tablets has been provided in these districts. Besides, more medicine like antibiotics, paracetamol, antacid, anti-venom injections, bleeching powder and ORS packets will be sent to these area in a war-footing.Among other, Health Commissioner Pramod Kumar Meherda, NHM Director Shalini Pandit, Odisha Medical Corporation MD Archana Patnaik, Special Secretaries BK Brahma and Mirza Naeem Baig, and other senior officials were also present in the review meeting.

2018-10-22
Editor in chief
Previous: Bhubaneswar Municipal Corporation has initiated a campaign in Odia against plastic
Next: Odisha government urged the Centre to supply domestic LPG cylinders free of cost to people affected by cyclone Titli