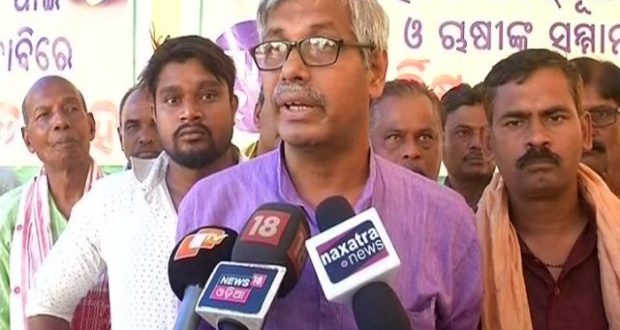 in State News October 22, 2018 Comments Off on Navnirman Krushak Sanghathan have decided to hold padayatras from October 29 to November 5 838 Views

Bhubaneswar:22/10/18: Farmers under the aegis of Navnirman Krushak Sanghathan (NKS) in Odisha have decided to hold padayatras from October 29 to November 5 demanding proper price for their agricultural produce, prestige and pension.

Announcing this in a press conference here, NKS National Co-ordinator Akshay Kumar said one padayatra will begin from Kuakhia in Jajpur district and another from Balugaon in Khurda district. Both will be culminated in Bhubaneswar.

He said thousands of farmers will join the padayatras in order to put pressure on the State government to fulfill the long-standing demand of the farmers.

The State government should make provision to allocate of Rs 21, 600 crore in its annual budget towards giving pension of Rs 5000  per month to around 36 lakh poor farmers in the State, Kumar said.

2018-10-22
Editor in chief
Previous: Odisha Government approved damage assistance of Rs 2770 crore for districts affected by cyclone Titli
Next: Odisha Congress in-charge Jitendra Singh said state government’s craziness for ‘Zero Casualty’ has led to the death of over 70 people in the cyclonic storm