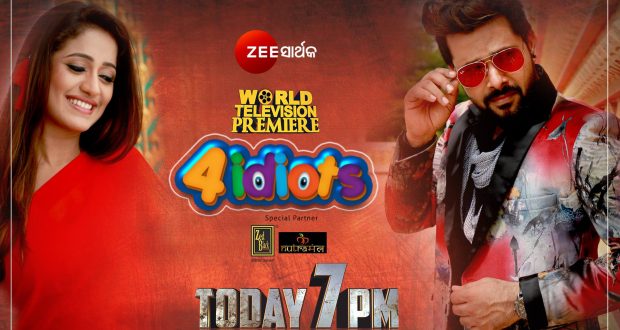 Bhubaneswar:21/10/18: Zee Sarthak  odia channel  is gearing up for  aired     odia cinema 4 idiots  on  21,October,2018 which was being   jointly produced by Akshay Parija Productions and Prakash Films. The four idiots in the movie will be played by actors Sabyasachi Mishra, Akash Dasnayak, Kuna Tripathy and Chittaranjan Tripathy . They will be seen opposite ‘princesses’, Elina Samantaray, Poonam Mishra, Chandni and Lipsa Misha, respectively. The cast promises the audience a movie that will have them ROFL-ing.Director Basanta Sahoo, known for popular movies such as Pilata Bigidigala and Bye Bye Dubai, has taken upon the challenge of making some actors perform funny scenes, who have never played comic characters before, in a short span of time. Premanand is the music director of this multi-starrer movie that will have five song sequences. Lyricists Basantraj Samal and Subrat Swain have penned the lyrics of these songs.

2018-10-21
Editor in chief
Previous: Devotees bid adieu to Goddess Durga in Cuttack and Bhubaneswar
Next: Prime Minister dedicates National Police Memorial to the Nation: announces an award in the name of Subhas Chandra Bose