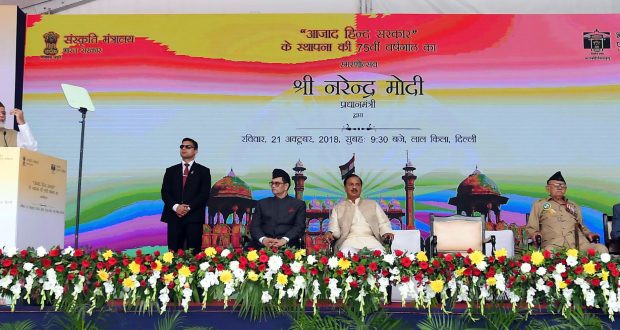 The Prime Minister, Shri Narendra Modi addressing the gathering at a function to commemorate the 75th anniversary formation of the Azad Hind Government, at Red Fort, Delhi on October 21, 2018. The Minister of State for Culture (I/C) and Environment, Forest & Climate Change, Dr. Mahesh Sharma and other dignitaries are also seen. 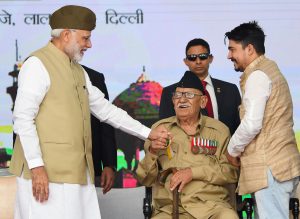 Recalling the contributions of Netaji, Modi said that Subhas Chandra Bose was a visionary,who united Indians to fight against the powerful colonial British rule. He added that Bose showed patriotism right from a young age, as was visible from the letters he wrote to his mother.

Prime Minister said that Netaji was not just an inspiration for Indians, but for all those who were fighting for self-determination and freedom in countries all over the world. In context he mentioned how South African leader Nelson Mandela was inspired by Netaji. 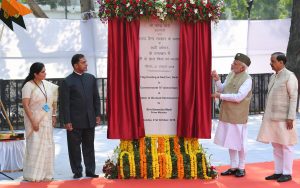 The Prime Minister, Shri Narendra Modi unveiling the plaque at the National Flag hoisting ceremony to commemorate the 75th anniversary formation of the Azad Hind Government, at Red Fort, Delhi on October 21, 2018.
.

Reminding the nation that there is a long way to go before building a new India as envisioned by Subhas Chandra Bose, Prime Minister urged the citizens to get inspired by Netaji and work towards the development of the nation. He added that India achieved independence after lots of sacrifices and it is the duty of citizens to preservethat independence.Addressing the gathering, Prime Minister said that Netaji Subhas Chandra Bose laid down the foundation for equal opportunity for women in armed forces, through the formation of Rani Jhansi Regiment. Prime Minister said that the government is carrying forward this legacy in true means and reiterated that women will be given equal opportunity for permanent commission in armed forces.

2018-10-21
Editor in chief
Previous: Prime Minister dedicates National Police Memorial to the Nation: announces an award in the name of Subhas Chandra Bose
Next: Similpal Tiger Reserve would be thrown open for tourists from November 1