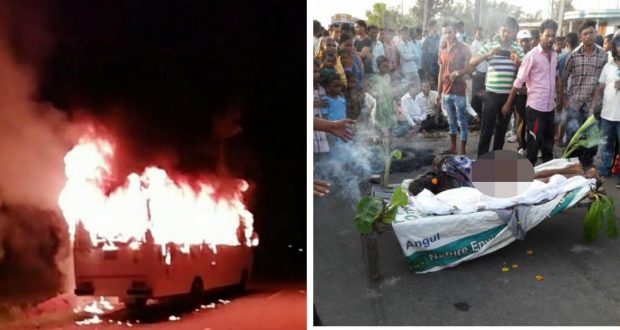 in District Diary October 21, 2018 Comments Off on More than 60 agitators were injured after they faced off with police during their protest against death of a man in alleged attack by tigress ‘Sundari’ 508 Views

Angul:21/10/18: More than 60 agitators were injured after they faced off with police during their protest against death of a man in alleged attack by tigress ‘Sundari’ in the core area of Satkosia Tiger Reserve (STR) in Angul district on Sunday.

The angry villagers of Tainsi village staged road blockade over the death of Trinath Sahu (60) and pelted stones at the policemen. The agitators later set two police vans on fire and vandalised two others.

Following the incident, tension prevailed in the area. The police forcibly removed the protestors from the road and restored the vehicular movement on the route at 7 pm.

According to sources, Sahu had gone for fishing when Royal Bengal Tigress Sundari attacked him and killed him.

On being informed, an Assistant Conservator of Forest (ACF) along with other forest officials rushed to Tainsi village to take stock of the situation. However, the villagers detained and thrashed the forest officials.