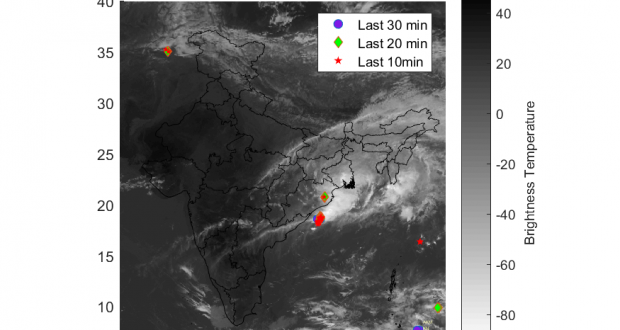 Newdelhi:12/10/18:The Deep Depression over Odisha moved east-northeastwards in past six hours with a speed of 8 kmph, and lay centred at 0530 hrs IST of today, the 12th October 2018 over Odisha near latitude 20.4°N and longitude 84.6°E, 30 km north-east of Phulbani and 70 km southwest of Angul. It is very likely to move northeastwards towards Gangetic West Bengal and weaken into a depression during next 12 hours.

Forecast track and intensity are given in the following table:

The Very Severe Cyclonic Storm ‘LUBAN’ over westcentral Arabian Sea moved slightly northward during past 06 hours with a speed of 02 km/hour and lay centered at 0530 hrs IST of today, the 12th October 2018 over westcentral Arabian Sea, near latitude 14.7°N and longitude 57.6°E, about 450 km east-southeast of Salalah (Oman), 460 km east-northeast of Socotra Islands (Yemen) and 610 km east-southeast of Al-Ghaidah (Yemen). It is very likely to move west-northwestwards towards and cross Yemen & adjoining South Oman Coasts around 15 degree north during noon of 14th October 2018 as a severe cyclonic storm.

The sea condition is phenomenal around the system centre. It will become very high  ll is very likely become very high over westcentral Arabian Sea and adjoining Gulf of Aden till 14th October 2018 noon.

The fishermen are advised not to venture into westcentral Arabian Sea & Gulf of Aden till 14th October.