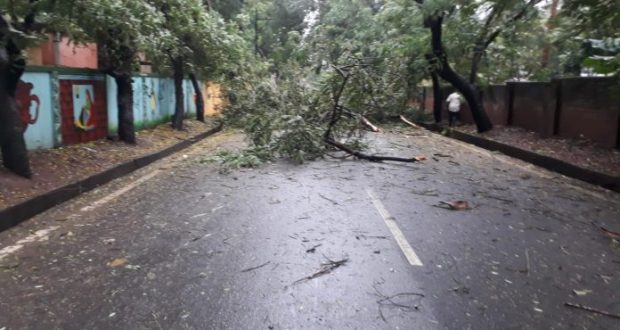 Ganjam, Gajapati and Rayagada districts mainly bore the brunt of the cyclone Titli

in District Diary October 11, 2018 Comments Off on Ganjam, Gajapati and Rayagada districts mainly bore the brunt of the cyclone Titli 733 Views

Berhampur:11/10/18 People in large parts of the State heaved a sigh of relief with cyclone Titli considerably weakening after its landfall in Odisha-Andhra Pradesh coast early morning today

The Ganjam, Gajapati and Rayagada districts in Southern Odisha mainly bore the brunt of the cyclonic storm with reports of storm uprooting trees and electric poles in these districts. No report of casuality has been received so far from any part of the State.

Mud-walled and asbestos shed houses were damaged extensively in these districts.

Meanwhile people in seaside villages in Kendrapara, Jagatsinhpur, Puri and Ganjam district who were evacuated yesterday night are slowly returning back to their respective houses.

“We are relieved. The cyclone Titli warning had triggered panic. By God’s grace, the nature’s fury has spared us. We did not take chances after cyclone warning was sounded. We voluntarily shifted ourselves to multi-purpose cyclone shelter”, said a resident of Sandhakuda locality in Paradip port town.

2018-10-11
Editor in chief
Previous: Odisha Chief Minister has reviewed the situation after CycloneTitli made a landfall near Palasa
Next: Journalist Abhijit Iyer Mitra has tendered an apology for making disparaging and derogatory remark