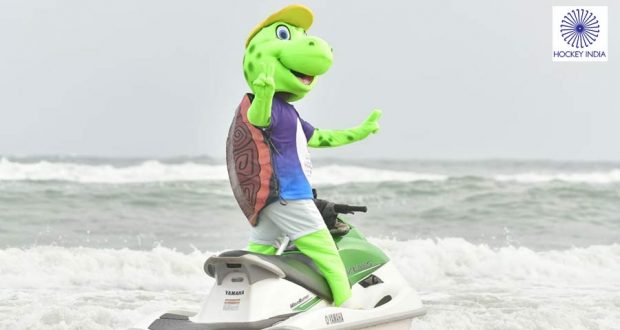 Bhubaneswar:9/10/18; The official mascot for Odisha Men’s Hockey World Cup, Olly is being welcome hockey lovers to Odisha in his characteristic style at the Puri sea beach on October 9. As part of the promotional campaign in the run-up to the World Cup, the Department of Sports and Youth Services would be hosting an event on Tuesday to signify the launch of the official World Cup mascot.

Olly would not only make his vibrant presence felt but also surprise the ardent hockey lovers of the state with an unmatched show of skills. After the grand launch event, he would be involved in a photo shoot with all his fans on the beautiful sandy coastlines of Puri. He would be addressing the media later, promoting the beautiful sport of hockey while raising awareness about conservation of his Olive Ridley turtle brethren.

Vishal Dev, Commissioner-cum-Secretary of the department said, “We are glad that Olly is coming to Puri to welcome all Odias and other hockey lovers to the World Cup in December. Olly has a few plans to surprise us. We hope to see a large turnout at Puri sea beach to welcome him.”

Olly personifies the spirit of sportsmanship and also sends across an urgent message for conservation of our natural habitat. He encourages us all to imbibe the principles of fairness and competition that sport teaches us while at the same time, strives hard to make conscious and coordinated efforts to help save the diverse habitats of his fellow brethren at the oceans.

2018-10-09
Editor in chief
Previous: Odisha government ordered closure of all schools and colleges in four districts till October 12 for Cyclonic Storm ‘Titli
Next: Nine women having excellent contributions to various fields worshiped at a function, Naba Matruka Puja