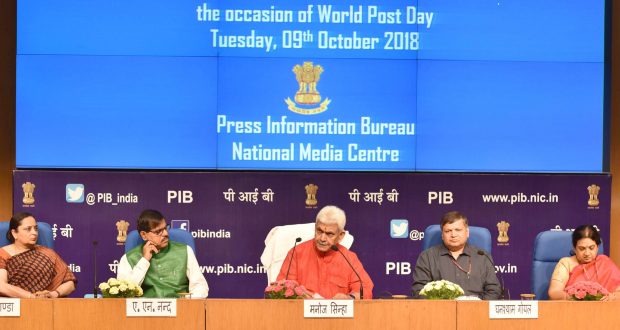 The Minister of State for Communications (I/C) and Railways, Shri Manoj Sinha addressing a press conference, on the occasion of the World Post Day, in New Delhi on October 09, 2018. The Secretary (Post), Shri Ananta Narayan Nanda and other dignitaries are also seen.

Newdelhi;9/10/18:Minister of State for Communications (Independent Charge), Shri Manoj Sinha today shared the details of the public outreach activities being undertaken by the Department of Posts (DoP) during the National Postal Week starting October 09, 2018. The Minister was addressing the media here on the occasion of World Post Day 2018. This day marks the creation of the Universal Postal Union (UPU) in 1874.

Addressing the gathering, the Minister said – “With the nation-wide launch of 650 branches and 3250 access points of IPPB by the Prime Minister last month, the trusted Postman has now become a banker to millions of unbanked and under-banked Indians who have so far had no access to financial services. More than 12 lakh IPPB accounts have been opened so far, with a balance of more than Rs. 13 crores. All the 1.55 lakh Post Offices in the country will be linked to the IPPB system by December 31, 2018.

Shri Sinha also shared that India Post is committed to provide responsive and convenient citizen-centric services to the people of the country. The Department has set up and operationalized 221 Post Office Passport Seva Kendras (POPSKs) in partnership with the Ministry of External Affairs (MEA), and processed more than 15 lakh passport appointments so far. Additionally, 13,352 Aadhar Enrolment and Updation Centres have been set up in partnership with the Unique Identification Authority of India (UIDAI),where more than 21 lakh enrolments and updates have been completed.

The benefits of the Postal Life Insurance (PLI) product have now been extended to doctors, engineers, management consultants, CAs, architects, teachers, lawyers, and bankers, as well as employees of companies listed on the NSE and BSE. More than 1600 villages in the country have been covered under the Sampoorna Bima Gram (SBG) Yojana, providing financial security to more than two lakh families in these villages. Of the 1.46 crore Sukanya Samriddhi Accounts opened in the country so far, 1.27 crore accounts reside with Post Offices. The Department has also launched creative initiatives such as the Deen Dayal Scholarship for Promotion of Aptitude and Research in Stamps as a Hobby (SPARSH), under which 841 students were awarded scholarships during the year 2017-18.

Shri Sinha also released a corporate brochure on the products and services being offered by India Post.Shri Sinha also emphasized that, under the leadership of the Prime Minister Shri Narendra Modi, the Government is committed to take care of it’s staff, who are the foundation to support the changing face of the Department. “The recent revision in the wages and allowances of more than 2.6 lakh Gramin Dak Sevaks (GDS), resulting in an average increase of more than 55% in the emoluments of this category, is only a small step in this direction”, he concluded.