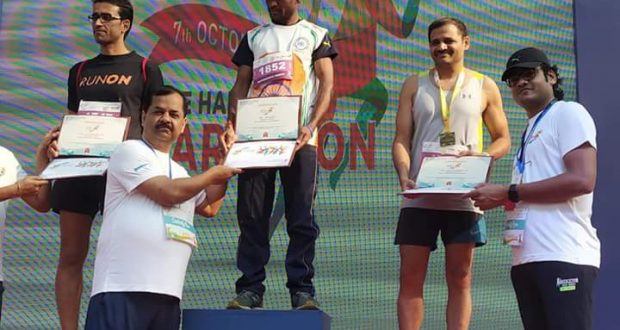 Pune Half Marathon concludes in style

Mumbai:7/10/18:A unique event was held in Pune today, to spread the message of Swachh Bharat. The Senior officers from various departments across the state and Central Government in Pune city, ran in a Pune Half Marathon event, early morning for the cause of ‘Swachh Bharat’! The run was organized by the Regional Outreach Bureau, Ministry of Information and Broadcasting, in association with Pune Road Runners group and other organizations.Recognizing the efforts of the ROB in enlisting peoples’ participation in creation of awareness about the Swachh Bharat Abhiyan, through a unique Marathon run, the India Post department has released a special cover on this occasion. “”The cover is released to commemorate the efforts of the Government in bringing Peoples’ participation for the cause of Swacchh Bharat. Pune Half Marathon dated 7th October 2018, Sunday, is one such incident where various organisations/individuals came together with the Regional Outreach Bureau, Ministry of I&B , to create an  awareness about the cause of Swachh Bharat. The run was organised in three categories of 21K, 10K and 6K with a participation of 2500+ runners from various walks of life. ‘I …am Running for Swacchh Bharat !’ was the tagline for the run!”, mentions the Special cover.

The Half Marathon was organised in three different categories of 21kms, 10kms and 6kms where nearly 2500+ runners from across the state, participated. On the route, there were signages of ‘I…am running for Swacchh Bharat’ and pictorial signages for ‘segregation of wet and dry waste’! There was a Swaccchh Bharat song played on the Marathon route by the Song and Drama Division cultural troupe, inspiring runners on their way to the podium. Every participant was given Marathon medal and specially designed Swacchh Bharat Certificate. At the venue, there was a Swacchh Bharat photo frame, gifted to each participant.

The special attraction during the run, was a ‘Celebrity Run’ of 1km, for which nearly 30 senior officers from various government departments, took part. Celebrating success of the event, organiser of the event and head of Regional Outreach Bureau Pune, Shri Santosh Ajmera said that, it was an effort to bring various organisations together to give a fillip to the Peoples’ movement for the cause of Swachh Bharat. He said that ROB is looking forward to many more such events across the Maharashtra in coming year. He thanked the participants who ran for the cause of Swacchh Bharat toda