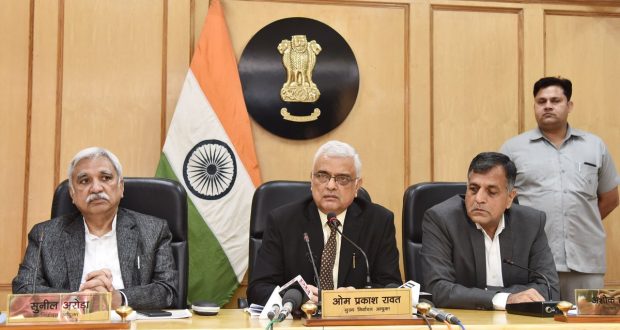 in National October 6, 2018 Comments Off on Election Commission of India announces Schedule for the General Elections to the Legislative Assemblies of Chhattisgarh, Madhya Pradesh, Rajasthan, Mizoram & Telangana, 2018 763 Views

Newdelhi:6/10/18:The terms of the Legislative Assemblies of Chhattisgarh, Madhya Pradesh, Rajasthan & Mizoram are normally due to expire as follows:

The Governor of Telangana vide his order dated 06.09.2018 has dissolved the Telangana Legislative Assembly with immediate effect.

By virtue of its powers, duties and functions under Article 324 read with Article 172(1) of the Constitution of India and Section 15 of the Representation of the People Act, 1951, and the Judgement of the Hon’ble Supreme Court in Special Reference No. 1 of 2002, the Commission is required to hold general elections to constitute the new Legislative Assemblies in the States of Chhattisgarh, Madhya Pradesh, Rajasthan & Mizoram before expiry of their present terms and in the State of Telangana, where the State Legislative Assembly has been prematurely dissolved, within a period of six months from the date of premature dissolution of the Assembly i.e. by 05.03.2019.

The Commission has prepared the Schedules for holding General Elections to the Legislative Assembly of Chhattisgarh, Madhya Pradesh, Rajasthan, Mizoram & Telangana after taking into consideration all relevant aspects like climatic conditions, academic calendar, major festivals, prevailing law and order situation in the State, availability of Central Police Forces, time needed for movement, transportation and timely deployment of forces and in-depth assessment of other relevant ground realities.

The  Commission  after  considering  all  relevant  aspects  has  decided  to  recommend  to the Governor of the States of Chhattisgarh, Madhya Pradesh, Rajasthan, Mizoram & Telangana to issue notifications for the General Elections under the relevant provisions of the Representation of the People Act, 1951, as per the Schedule below.

The Commission seeks the active cooperation, close collaboration and constructive partnership of all the esteemed stakeholders in the electoral process and strives to employ the collective synergies towards delivering a smooth, free, fair, peaceful, participative and festive General Assembly Elections, 2018 in Chhattisgarh, Madhya Pradesh, Rajasthan, Mizoram & Telangana.

Schedule for General Election to the Legislative Assembly of Chhattisgarh, 2018

(For elections to 18 Assembly Constituencies listed in Annexure I)

(For elections to 72 Assembly Constituencies listed in Annexure II)

Schedule for General Elections to the Legislative Assembly of Madhya Pradesh, 2018 (All 230 ACs)

Schedule for General Elections to the Legislative Assembly of Rajasthan, 2018 (All 200 ACs)

Schedule for General Elections to the Legislative Assembly of Mizoram, 2018 (All 40 ACs)

Schedule for General Elections to the Legislative Assembly of Telangana, 2018 (All 119 ACs)

The Commission has made elaborate arrangements for ensuring the effective implementation of the MCC Guidelines. Any violations of these Guidelines would be strictly dealt with and the Commission re-emphasizes that the instructions issued in this regard from time to time should be read and understood by all Political Parties, contesting candidates and their agents/representatives, to avoid any misgivings or lack of information or inadequate understanding/interpretation. The government of the poll-bound States has also been directed to ensure that no misuse of official machinery/position is done during the MCC period.

The Commission has also issued instructions for swift, effective and stringent action for enforcement of Model Code of Conduct during the first 72 hours of announcement of the election schedule and also for maintaining extra vigilance and strict enforcement action in the Last 72 hours prior to the close of polls.  These instructions have been issued in the form of Standard Operating Procedures (SOPs) for compliance by the field election machinery.

2018-10-06
Editor in chief
Previous: 12 more arrested for their alleged involvement in the violent protest against Dhadi Darshan
Next: Naveen Patnaik flagged off pilgrimage train for senior citizens under the Baristha Nagarika Tirtha Yatra Yojana