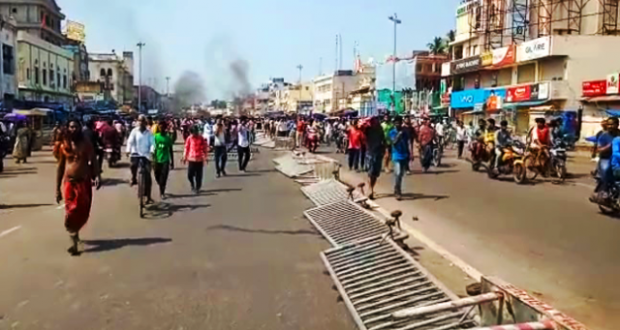 in State News October 6, 2018 Comments Off on 12 more arrested for their alleged involvement in the violent protest against Dhadi Darshan 582 Views

Puri:6/10/18: The Singhadwara police today arrested 12 more persons for their alleged involvement in the violent protest against Dhadi Darshan (queue system) at Srimandir here on October 3.

With this, total number of arrested persons in this connection rose to 23. Puri SP Sarthak Sarangi said action is being taken according to CCTV footage of the incident.

As per the the order of DGP RP Sharma, police yesterday had arrested 11 persons and forwarded them to court in connection with the incident.

2018-10-06
Editor in chief
Previous: India beat West Indies by an innings and 272 runs in the first cricket Test
Next: Election Commission of India announces Schedule for the General Elections to the Legislative Assemblies of Chhattisgarh, Madhya Pradesh, Rajasthan, Mizoram & Telangana, 2018