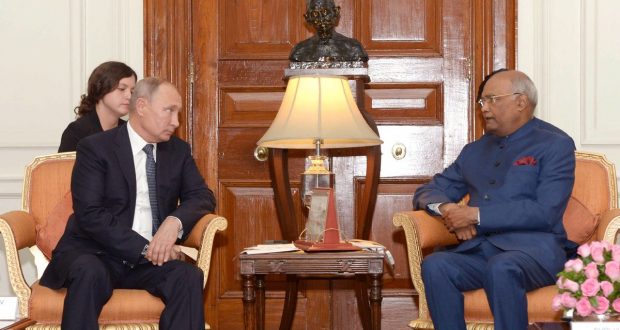 President of Russian Federation Calls on the President

Welcoming the Russian President to India, the President said that India-Russia warm and friendly ties are progressing well. Our 19th Annual Bilateral Summit was a success. This has been a very productive year for our relations and significant achievements have been made.

The President said that India deeply appreciates Mr Putin’s personal contribution to the India-Russia Special and Privileged Strategic Partnership. He was happy to note that defence cooperation between the two countries is strong and growing. The President said that there have been significant developments on military technical cooperation, which is one of the pillars of our strategic partnership.

The President said that India is keen to enhance it economic ties with Russia. Bilateral trade now stands at US $ 10 billion. We need to further improve upon it to reach the target of US $ 30 billion by 2025.

The President said that inter-regional cooperation between the Indian states and the regions of Russia is important to strengthening our partnership. We need to encourage and promote this engagement. We believe that the Russian Far East can become a new focus area.

The President said that India and Russia have always had excellent cultural relations. He was happy to note that the Festival of India has been organised in the Russian Federation, after a gap of 30 years. It was inaugurated at the Kremlin Palace and will continue till March 2019 in various cities of Russia.