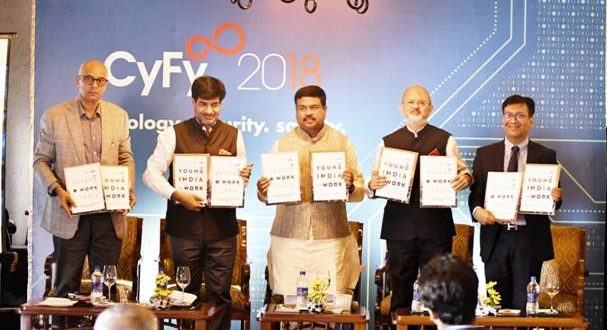 in National October 5, 2018 Comments Off on Dharmendra Pradhan launches a Task Force for Closing the Skills Gap in India 586 Views

Newdelhi:5/10/18:Dharmendra Pradhan, Minister of Petroleum and Natural Gas & Skill Development and Entrepreneurship today launched a Task Force for Closing the Skills Gap in India, in collaboration with the World Economic Forum. The task force will bring together leaders from business, Government, civil society, and the education and training sectors to accelerate the future-proofing of education and training systems in the country. Shri Dharmendra Pradhan will co-chair the task force along with Shri Salil Parekh, Chief Executive Officer and Managing Director, Infosys. The goal of the Task Force is to develop an action plan to address skills gaps in India and make the Indian workforce ready for jobs of future.

Shri Pradhan also released reports on ‘Future of Work in India’, an enterprise survey on future of work in India and ‘Young India and Work’, a survey of youth aspirations in India.Shri Dharmendra Pradhan, while speaking on the occasion said that with more than half of our population in the working age, skills development will be critical to sustaining inclusive growth and development in India. The “Closing the Skills Gap” Task Force will be a significant step to accelerate the impact on skills development already achieved by bringing together relevant stakeholders to act collectively.He thanked World Economic Forum and Observer Research Foundation for coming out with reports on these important areas particularly related to the aspirations of Indian youth.The Task Force is the second country-led public-private collaboration of the World Economic Forum’s Closing the Skills Gap Projectafter South Africa.

2018-10-05
Editor in chief
Previous: Commerce Minister Releases Study on India-China Trade
Next: List of Agreements/MoUs Exchanged between India and Russia during Visit of President of Russia Vladimir Putin