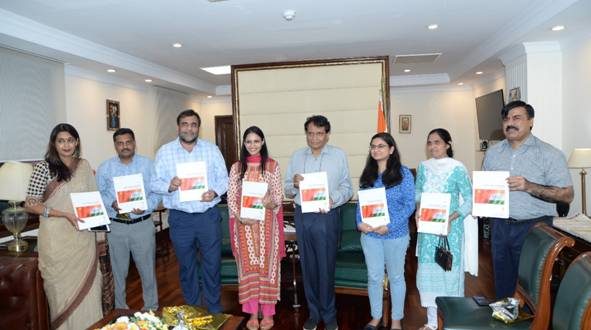 Newdelhi:5/10/18: Union Minister of Commerce & Industry and Civil Aviation, Suresh Prabhu, released a study by the Department of Commerce on India-China Trade.  The report tries to analyzethe magnitude, extent and plausible reasons of India’s rising trade deficit with China.

The Commerce Minister said that India’s trade relationship with China is unique and no other bilateral trading relationship evokes as much interest in India as the India-China trade relationship. From being a small trading partner of India in 2001, within a span of fifteen years, China has rapidly become India’s biggest trading partner. Trade between the two countries has been expanding but India’s trade deficit with China has been growing.

While releasing the study the Minister said that most industry associations want the Government to pursue a defensive approach to Free Trade Agreements (FTAs) and raise tariffs on the doctrine of domestic markets for domestic producers. Protectionist policies are on the rise globally. The global use of protectionist measures in 2018 was unprecedented with the trade wars looming between two of the largest economies of the world.

Hence, a comparative analysis of the concessions ceded by China on 200 products in its Free Trade Agreements to India’s competing countries like Peru, Pakistan, Australia, South Korea and ASEAN has been carried out by the Department of Commerce. Also the imports of China from these countries as well as China’s Most Favored Nation (MFN) rates have been studied. This analysis helps in studying whether an FTA or tariff concessions by China to India (like China has yielded to India’s competing countries in FTA) can be beneficial in increasing India’s exports to China. The idea behind this exercise has been to identify whether tariff concessions by China to other countries impede raising the share of India’s exports in the Chinese market. These lines can be taken up by India for negotiations with China under agreements like Asia Pacific Free Trade Agreement (APTA) in which both India and China are involved during the review exercise.

The study is divided into eight sections beginning with an introduction into the historical aspects of trade relations between India and China and the trends of bilateral trade between the two. It also looks into the trends of trade deficit, and analyses India’s exports and imports to and from China at the HS 6-digit level. It alsoanalyses at HS 6-digit level, China’s share in India’s import basket (extent of dependency on China as a source) and India’s share in China’s export basket.

Competing countries who have FTAs with China, limits the scope for Indian exports. This is due to higher tariffs faced by exporters as compared to competing nations who have secured tariff concessions under their FTAs. The top 200 items of China’s imports from India (2017) wherein the tariff advantages available to India’s competing partners in the Chinese market have been analyzed.

The study also underlines the opportunity available for India in increasing its services exports to China. Indices like Revealed Comparative Advantage (RCA) and Trade Complementarity Index (TCI) have been used to analyse the extent of India and China’s competiveness in this arena and the potential for the future.

There is a separate section on the opportunities arising for India out of US – China trade standoff with a detailed analysis of specific tariff lines on which tariffs have been levied by China on the US amidst the ongoing trade war and the potential for India to fill in the gaps left by America in the Chinese market.

2018-10-05
Editor in chief
Previous: President of Russian Federation Calls on the President
Next: Dharmendra Pradhan launches a Task Force for Closing the Skills Gap in India