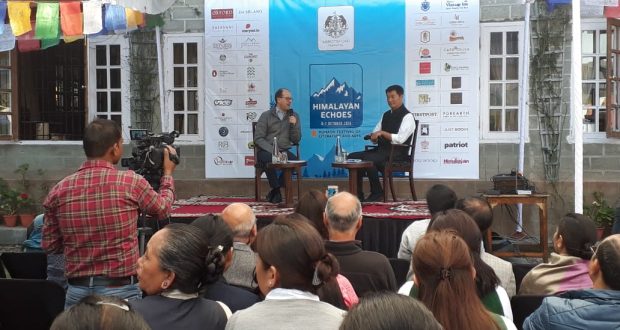 Nainital:5/10/18:The third edition of Himalayan Echoes took off with the outreach session for the Tibetan community residing in Nainital. India’s fascination with Tibetan diaspora since 1959 goes a long way in shaping the socio-cultural, economic and political dimension of the land and its people.

At Himalayan Echoes today, Dr.Sangay was in conversation with Patrich French (world renowned British writer, historian and academician. Some of his famous works includes Tibet, Tibet:Personal History of a Lost Land, India: A Portrait, Younghusband:The Last Great Imperial Adventurer)) , shared his thoughts and ideas on the present and future possibilities for Tibetans in India under his young leadership.

Tibetan community heads and other local lumanaies from the DSB university and UGC were present at the session. They discussed the Central Tibetan Administration’s ‘Thank You India!’ initiative, marking 60 years since the Dalai Lama and the first Tibetan refugees came to India.

Dr Sangay said: “No country has done more for Tibet and the Tibetan people than India. We stand on our own feet because of India. We have dedicated this year for India, and I have come to thank the beautiful state of Uttarakhand.”
Dr.Sangay highlighted the vital importance of Tibet for its impact on global environment. Tibet is often referred to as the Third Pole with its large icecap from which most of the major rivers of Asia emanate. About 1.4 billion people depend on this water from Tibet. As per NASA’s estimate 70% glaciers of Tibet will melt by 2100 causing huge damage to the global climate.

Dr.Sangay highlighted that the Tibetan movement has been successful in preserving their identity, culture and spirituality. In fact contrary to the effort by colonizing powers to eradicate Buddhism, Buddhism has flourished throughout the world including in China itself. And this is a big victory. He added that it is quite possible the next Dalai Lama is selected in exile even though the Tibetan movement will push for continued conversation with the Chinese.
Dr French said: “It’s lovely to be back in the hills, and to be in conversation with Sikyong Lobsang Sangay. My first journey to Tibet was in 1986 when I was a student, and it is a pleasure now to meet the Tibetan community in Nainital.”

Dr. Lobsang Sangay is the president of the Central Tibetan Administration (CTA). He has been Chief Executive of the Tibetan Government-in-Exile since 8 August 2011. After graduating from the Tibetan school in Darjeeling, Dr.Sangay received his B.A.(Hons) and LL.B. degrees from the University of Delhi in India. He was offered a Fulbright Scholarship to attend the Harvard Law School and is an expert on International Human Rights Law, Democratic Constitutionalism and Conflict Resolution. He is referred to as the “kind-hearted lio

2018-10-05
Editor in chief
Previous: High-speed and Smart Billing Solution from Millennium India
Next: President of Russian Federation Calls on the President