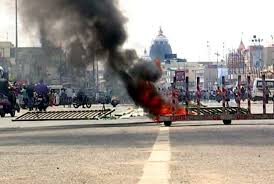 “A detailed report in this regard along with video footage of the incident will be submitted to the amicus curiae by tomorrow,” said Mohapatra to the media.

Besides, the Shree Jagannath Temple Information Centre and SJTA have also lodged two separate complaints with the police urging strong actions against the violent agitators who went berserk and vandalised temple properties.

Notably, the 12-hour bandh by Jagannath Sena opposing the queue system at the Srimandir took a violent turn when the protesters hurled stones at the residence of Minister Maheswar Mohanty’s residence and Puri SP. The violent mob also uprooted barricades in the Bada Danda (Grand Road), ransacked SJTA office and pelted stones on police personnel.

Though the queue system or ‘Dhadhi darshan’ for devotees was introduced by SJTA on October 1 in compliance with the Supreme courts order, the devotees violated the rules and entered the temple by pulling down the barricades.

The Jagannath Sena activists along with hundreds of locals staged road blockade by burning tyres on the Bada Danda.

2018-10-04
Editor in chief
Previous: Second edition of the Odisha Travel Bazaar will begin from October 5
Next: High-speed and Smart Billing Solution from Millennium India