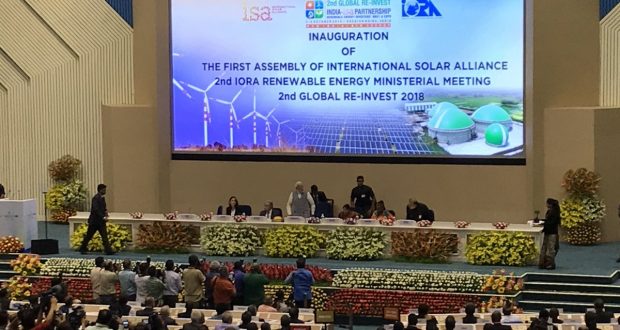 The first Assembly of International Solar Alliance was presided by the Minister of State (IC), Power and Renewable Energy, Shri R K Singh and Minister of State, Ministry of Ecological and Solidary Transition, France, Ms Brune Poirson co-presided the Assembly.

During the business proceedings of the Assembly, a joint declaration was signed between Indian Ocean Rim Association and International Solar Alliance. The Government of Haryana announced solar award in partnership with ISA in memory of Kalpana Chawla, the first woman astronaut of Indian origin to go to space. The Memorandum of Understanding was signed by Minister of Energy, Government of Haryana Dr. Banwari Lal, with ISA in the presence of the President and Co-President of the Assembly.

Throughout the day, renewable energy experts from the IORA countries deliberated on ways to collaborate and formulate strategies for rapid development and deployment of renewables.

There were country sessions by France and the United States, in which experts from these countries showcased their achievements and shed light on technological trends in different spheres of renewable energy.France and USA organized dedicated country sessions, which culminated in the signing of MoUs (Memorandum of Understanding) and a Joint Announcement.An MoU was signed between the French Agency for Development and Solar Energy Corporation of India, on innovation in Solar Energy and another MoU was signed between the French Commission for Atomic and Alternative Energies (CEA) – Bollore’ Blue Solutions, and Solar Energy Corporation of India (SECI), on storage, grid management and e-mobility. A Joint Announcement of Demand Aggregation Pilots was made between India and USA in the country session by USA.

Day one also witnessed two special sessions. Masayoshi Son, Chief Executive Officer of SoftBank Group, addressed the first special session where he talked about the low prices of solar power in India and highlighted the fact that his solar energy projects will provide free electricity to ISA member countries after 25 years of PPA.

2018-10-04
Editor in chief
Previous: Education is an instrument of social transformation:Vice President of India
Next: Central Government will give immediate relief of Rs 2.50 per liter on petrol and diesel